Bonnie Wasser has often used her writing as personal therapy and shared the journey with others. She has published children’s and adult fiction, inspiring articles, newspaper articles, newsletters, and two inspirational books (A Time for Everything and A Time to Laugh, A Time to Cry), published by Northwestern Publishing House. Bonnie is retired and lives in Kaukauna, WA. 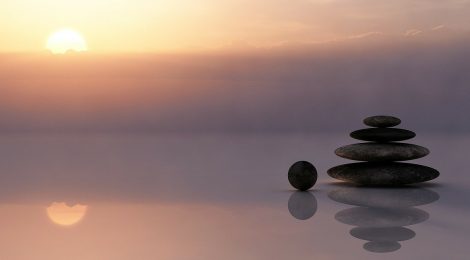 Experiencing true companionship with the Lord.

My husband, Bob, and I boarded the plane together in Florida, leaving our work with troubled teens and heading north for a short vacation to visit children and grandchildren. An hour and a half later, I walked off the plane alone — following the EMT’s carrying Bob.

Onboard the plane, Bob had been given constant CPR by four doctors, including a cardiologist, nurse practitioner, and multiple well-trained airline attendants — to no avail.

After the emergency landing, EMT’s took him to a trauma center minutes away. But his heart never started. The Lord had taken Bob. And after fifty-two years together, I was alone.

The thought of calling all twenty-five of our kids (three by birth, twenty-two by adoption) was daunting. After the first two calls, my kids promised to make sure their brothers and sisters were contacted.

Then while sitting and praying and gathering my thoughts for the next step, it dawned on me that the Lord had planned this well. Yes, I was in a strange city, without luggage, without Bob. But two of my Wisconsin sons were already on their way and estimated their arrival time at ten hours.

Meanwhile, I knew friends who lived less than two hours away. I called; they came to pick me up. So I waited . . . and pondered the blessings of having Bob by my side for fifty-two years.

During the next week in Wisconsin, I was seldom alone as kids, family, friends, and co-workers gathered for the funeral. It would be held in our former congregation, where one son and his family still attended. It was comforting to be surrounded by love, but we all knew we would too soon be heading back to our daily lives.

The question “What are your plans?” had to be answered. My kids made it clear that I had many places to go; their homes were all open to me.

My time was spent in constant prayer. “Lord, what do you want me to do?” Yet I knew. There was only one way to go: Back to Florida. Back to the Lord’s work.

To those who expressed surprise, I answered, “Bob’s work is finished; mine isn’t.” To those who questioned how I was going to do it, I answered, “One day at a time, and when it gets too hard, hour by hour and minute to minute.”

With every answer, I prayed for wisdom and His peace.

The worst came when I headed back to Florida. On the plane, I prayed for alone time. I found a window seat, opened my book, and pretended to read. At the airport I got my luggage and found the car.

With prayer, I started the drive back to the campus. No tears, just a horribly heavy feeling in my heart and stomach. Forty minutes later, I pulled off the freeway and realized I should pick up perishables because there were no more stores between here and the campus, still a half hour away.

Pulling into the parking lot, I cried and prayed, “Lord, I can’t do this alone. Please give me Your peace so I can get through this and do what You want me to do.”

Wiping my tears, I realized that my heart wasn’t hurting so much, and my stomach no longer felt sick and heavy. So I went in, got my perishables, and drove home.

On the campus, I pulled into my carport, took the groceries and luggage inside, and began putting things away, hoping no one had seen me arrive. But a knock on the front door said my co-workers had.

I opened the door, and my friend entered. We simply cried together and then finally talked. I prayed for the Lord’s peace for both of us — and it came. The missing was horrible, but bearable.

That began my acceptance. Not of Bob’s death; I had witnessed and accepted that on the plane and in the ER. Rather, I felt an acceptance of the Lord’s gift of peace. I couldn’t explain it, but I knew in my weakest times, I had only to ask, and the Lord would give it to me again . . . and again . . . and again.

Initially, I expected the usual stages of grief to come. But instead of feeling anger at Bob or God, I surprisingly felt angry with Adam and Eve for falling into sin. If they hadn’t given in to temptation, I’d still have Bob at my side.

Then I realized I dreaded going to chapel each day and church every weekend because I couldn’t sing.

Every hymn brought tears, not because of memories, although those were there. Rather, I felt the words and meanings of the hymns so deeply and so clearly, they overwhelmed me. Tears came instead of words.

The tasks of dealing with things like Social Security loomed like mountains. I tried for nearly four months to communicate with them — several times on the phone and one face-to- face visit of three hours.

I thought we were finally on the same page, but a letter came from Social Security, addressed to Bob. It accused him of fraud for continuing to receive a monthly check. To avoid charges, he had to appear in person in their office with his photo identification.

Another two hours on the phone revealed that the funeral director had reported Bob’s date of death one day off, so my filings never got connected. The worst moment came when the patient young man asked if I was sure which date was correct.

After my sobbing ceased, I assured him since I was at Bob’s side when his heart stopped; I was sure. He apologized for asking.

I learned to recognize the times I needed to quit thinking and break my tasks into simpler and smaller tasks, turning to the Lord to get through each.

Months passed. When I was overwhelmed, my heart unbearably heavy, and my stomach felt sick, I realized I was trying to cope with everything on my own instead of depending on the Lord. My prayer “Lord, please give me Your peace!” always brought His peace, just as Jesus told us in John 14:

“But the Advocate, the Holy Spirit, whom the Father will send in my name, will teach you all things and will remind you of everything I have said to you. Peace I leave with you; my peace I give you. I do not give to you as the world gives. Do not let your hearts be troubled and do not be afraid” (vv. 26, 27, NIV).

I am not afraid. And my prayers for others now include asking the Lord to give His peace to all who are hurting. His peace is not a worldly gift. It is far better and truly beyond our understanding.

Yes, occasionally I feel lonely. But with the Lord’s peace, I never feel alone. And I know my work here isn’t finished yet.