Katherine (Kat) J. Crawford has published her work in 17 compilations and numerous magazines. She has written a book, Capsules of Hope: Survival Guide for Caregivers, available on Amazon and Kindle. In addition to serving on the Leadership Team for Wordsowers Christian Writers in Omaha, Kat directs the Retreads (seniors) and leads a small group for her church. She lives in Omaha, NE. 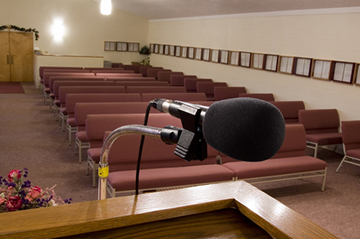 God can redeem any hurt for His use.

A pastor from two hours away called me. “Gary told us he is still depressed. He’s on his way home. We encouraged him to get help, but I’m afraid he’ll do something. . . .”

I had lived with same concern for months.

When I hung up, I bawled. “God, what do I do? My husband knows Hebrew and Greek. He knows Scripture better than I do. How can he be depressed? Our home is beautiful. Our congregation is growing, and they appreciate his ministry.”

Two hours later Gary walked in the house as if nothing had happened. He kissed me, loved up the dog, and talked about the weather.

The year before, Gary asked the congregation to gather around him in prayer. “Pray God will be the total God of my life,” he said.

Everyone surrounded their pastor and prayed. Two weeks later, Gary woke me in the night. “Do you ever think God has left you and your prayers are hitting the ceiling?”

I didn’t understand his questioning God. Often after his middle-of-the-night questions, Gary asked me to read him the scripture he felt was meant for him the day of his ordination:

The Spirit of the Sovereign Lord is on me,
because the Lord has anointed me
to proclaim good news to the poor.
He has sent me to bind up the brokenhearted,
to proclaim freedom for the captives
and release from darkness for the prisoners (Isaiah 61:1).

In May, Gary stood before our annual district assembly with a glowing report of all budgets paid and our church growth.

The district superintendent (DS) asked Gary to come forward, and many pastors prayed with him. Later the DS offered Gary free weekly counseling sessions in Boise. He also gave him a free counseling number to call.

At home, life seemed almost normal — for a few days. But then everything changed again. Gary functioned on autopilot from Friday through Sunday night. Monday he started the downhill slide.

Many times in the middle of the night he put his head in my lap and wept. He often asked me to read the words of Jesus to him.

Why did I think I could help Gary? I prayed for wisdom and often begged him to call the free counseling hotline.

“I’ve memorized the number.” His laughter sounded demonic. “I’ve dialed the number dozens of times, but I can’t talk to those people.”

Gary always said we didn’t have the money to drive the five hours to Boise for counseling. And of course, he never told the church board about his problems or asked for financial help.

Did I ever tell anyone? No. Who could I tell?

All my life, I had felt the preacher’s wife didn’t share with church friends — even best friends — especially about their husbands.

Who could I talk to? My parents became Christians under Gary’s ministry, and my siblings weren’t believers. If Gary wouldn’t call the DS, could I?

In August I attended the yearly retreat for pastors’ wives. Before I drove away, Gary kissed me goodbye. His demeanor said, “I might run away or attempt suicide.” I could do nothing but leave him in God’s hands.

While traveling, I silently prayed, “Lord, my husband is fragile. He has spiraled into a black abyss. I can’t see or understand his world. Help him, Jesus. Keep him safe.”

That evening the retreat speaker asked us to turn to Luke 9:23: “Then he [Jesus] said to them all: ‘Whoever wants to be my disciple must deny themselves and take up their cross daily and follow me.’”

The speaker lifted his head. “Ladies, for some of you, your cross is your husband.”

How did he know my burden? At the close of the service I knelt at an altar and let loose of the “cross” I carried. I felt relieved and slept peacefully.

But my peace didn’t last long. The next day a sheriff called the retreat center office. “Mrs. Crawford, your husband attempted suicide.”

The DS and his wife drove me to the town where Gary was held in jail. At the courthouse the sheriff told me, “Your husband attacked me, and unfortunately, that’s a mandatory two-year prison sentence. But God is a God of miracles. He kept Gary alive.”

The officer said Gary screamed and yelled but never once cursed. “When I finally wrestled him to the ground, I lay on top of him and sang ‘Jesus Loves Me’ in his ear until he calmed down.”

The judge read through the charges. “This man doesn’t even have a speeding ticket. He doesn’t need prison; he needs help. I sentence Gary Crawford to two years probation.”

The DS and our daughter talked Gary into admitting himself into a mental hospital, where he spent a month.

After Gary was there a week, his doctor told me the psychotic breakdown had affected his mind.

“We don’t know the future, but your husband might not fully recover,” he said. “A total burnout like your husband’s doesn’t happen overnight or heal quickly, either.”

I had moved to our daughter’s home across the state when Gary called one day. Having relinquished his preacher’s license, he asked me for a divorce. “I’m no good to God or anyone else. You’ll be better off without me.”

Divorce? If he had cancer, I wouldn’t leave him. How could I think divorce because of a mental health problem?

I searched for someone to talk with. I knew two pastors in our state had suffered breakdowns.

When I called, both wives denied their husbands’ problems as if in denying the major depressive episodes, their lives would be normal.

A few weeks after leaving the mental hospital, Gary called me. “I’ve got a job. Will you consider coming to live with me again?” Of course I did.

After some time on his job, Gary’s boss said Gary had not completed one contract correctly. How could we renew Gary’s burned out mind?

The answer came through a simple game of cards. Our family hadn’t played for years, but for the next six months we often played Rummy with Gary’s boss and girlfriend. As my husband tallied the score, little by little he regained mathematic skills.

Though Gary was making some progress, frustration built in me. One night while he slept, I prayed, “Lord, why did You give me gifts for ministry and now put me on the shelf?”

I heard a voice say, “What better ministry can I give you than to take care of My broken one?”

I then realized that although I didn’t choose the journey, being Gary’s loving, understanding wife became my new ministry.

Gary’s emotional and spiritual breakdown changed my daily life. Now that I was no longer too busy with church ministries, I could give my husband more quality time, instead of my leftovers at the end of the day. We grew closer.

We moved from the Northwest to Nebraska to be near Gary’s family. He found a maintenance position in a large church, and I found work at a Christian university.

The church staff and board knew Gary’s history before they hired him. This large congregation knew only that the church janitor listened and prayed with them.

Over our evening meal Gary often talked about his conversation with someone at church. He didn’t share names, but he related that the hurting or depressed individual talked to him and that he shared Scripture with them.

One night Gary said, “I believe I’ve done more ministering behind the toilet bowl than from behind the pulpit.” Tears formed in his eyes. “Since my teens I felt God told me to help the brokenhearted and release others from darkness. He’s allowing this broken down preacher to minister again.”

In my mind, God focused my ministry on my husband and family — so different from being pianist, drama director, and in any number of out-front leadership positions.

But ministry wasn’t confined to home. Many of my co-workers brought their prayer requests to me. Some cried in my arms, and a few asked for spiritual guidance.

Our company owner, a strong believer, allowed a friend and me to start a prayer group. Along the way someone tagged me the “Prophet Nudge,” because I’m continually urging others to join us. Many are now regulars.

Though our outreach isn’t what Gary and I envisioned in the early years of our ministry, God raised our broken lives from the ash heap not just to survive but to serve — in His way.