Charles Huff has served as a Bible teacher and minister in his church for twenty years. He is a contributing author in Gifts from Heaven: True Stories of Miraculous Answers to Prayer and has devotionals published in https://christiandevotions.us/ and The Upper Room. His Boosterclub Blog at https://chashuff.wordpress.com/ offers encouragement toward the abundant life Jesus promised. Charles and his wife live in Aurora, IL. 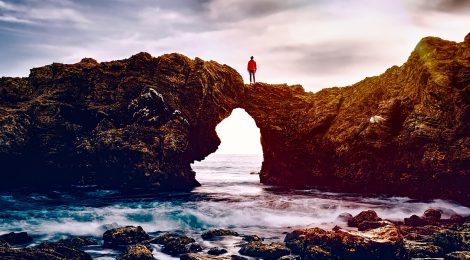 The key to overcoming a painful past.

My dad was an alcoholic. A mean one. One late night when I was in fourth grade, Dad’s violent threats peaked. I crept close to Mom’s side. “Why is Dad loading his shotgun?”

“I don’t know.” She brushed past me and headed straight for Dad. Jesus must have enabled Mom to wrestle the gun away from him; he hadn’t expected her to do that. The confusion this caused him allowed us to escape out the front door and run across the highway toward a neighbor’s house.

We heard the front door slam shut, and then the car’s motor roared to life. He’s going to use the headlights to find us, I thought. Mom must have had the same concern, so she pushed me low into a ditch. The headlights swept across the yard behind us as Dad turned out of the driveway and headed back toward town.

From the neighbor’s house, Mom called the sheriff, who escorted her back to the house. She packed what she could for us to start a new life with her parents two hours away.

It didn’t take Dad long to find us. A few weeks and several phone calls later, Mom hung up the phone. “That was your dad. He wants us to come home.”

A wave of panic swept over me and pulled me under in its riptide. “We’re not going to, are we?”

“He said he has stopped drinking and has gotten rid of the guns.”

“You believe him? He’s just hidden the guns maybe.”

“I said that, too, but he said he can’t get them back. He said he’s even gone to church with his mother.”

I begged Mom not to go back. I hated my new school, but it was far better than what I feared waited for us back home.

Mom’s face held a layer of confidence in her decision over a foundation of concern. “I can’t afford to take care of us by myself. We don’t have a choice. We will go back home. Maybe he has changed.”

“No. Somehow, we can make it on our own. Can’t we try?” Bold words for a ten-year-old, but I was desperate. I knew nothing about lower pay for women, job limitations, and the costs of housing, food, and medicine. Being free of terror was all that mattered.

Mom had already made her decision. When we got home, we found things as he said. However, he refused to go to church our first Sunday back. My sense of safety was short-lived. And at the next hunting season, all the guns reappeared in the gun cabinet.

In my teens, I found the first person I could talk to about my life at home: my best friend’s mother. “Ever since fourth grade,” I told her, “I have been afraid to open the door when I get home. I’m always afraid of what I might find on the other side. I go to sleep never knowing if I will wake up in the morning or be the headlines in the local paper.”

This woman had grown up in a similar situation and understood. As she shared her stories in response, I learned survival was possible. She often encouraged me to spend the night at their house instead of going home. That oasis helped me through high school.

After my first year in college, Dad became seriously crippled by a stroke. He no longer drank, but his reasoning and attitude were forever trapped in that state.

I couldn’t wait to cut all ties from him and give back to him the hell he put Mom and me through. I took my first step when I went away for college my junior year. But my fears stayed with me.

Seven years later, the unthinkable happened: Jesus told me to forgive my dad. To me, forgiving him when he saw no need to be forgiven was out of the question.

Jesus and I argued several times over this. As I eventually softened to the idea, He added that I should ask Dad’s forgiveness for the rotten example of Christianity I had been to him. I had been stubborn. Angry rebellion shrouded my every communication with Dad. I never did bad things, but I let him know he had no authority over me.

A new round of arguments broke out between Jesus and me. But they ended when I admitted He was right about my asking Dad’s forgiveness.

I obeyed Jesus, and thus began a tenuous building of kinship. As the relationship between Dad and me worked out, I learned a lot of things — like forgiveness is not complete in the beginning. If anything triggered my memories, hurt and anger flooded my thoughts, and I would have to determine to forgive again. As I continued in this cycle, forgiveness became more real; joy followed.

I learned that forgiving often requires returning evil with good. Paul says in Romans that this is like putting coals of fire on the other person’s head. In ancient times coals of fire given to another was a blessing, so those coals could take on that form. Early in my learning experience I still envisioned and hoped for hell-fire on my father instead.

I learned that Jesus said something we tend to take too lightly or try to explain away — or at least I did: “But if you do not forgive, neither will your Father in heaven forgive your trespasses” (Mark 11:26). I knew I couldn’t afford to have any portion of mercy and forgiveness withheld from me because of my hardness of heart. Perhaps that’s when I need them the most.

Just as Jesus forgave from the cross when the crowd didn’t want His forgiveness, I must be the first to see the need and do it, not wait for a repentant heart. That’s part of conforming into His likeness, and perhaps the hardest lesson I learned.

Forgiveness brought me freedom. It purified my heart by revealing hidden motives and routing them out. This made room for more love I could share with my dad — someone who needed it most.

In my Bible I read Jesus’ first word on the subject: “Blessed are those who mourn,
for they shall be comforted” (Matthew 5:4). Forgiveness started with being broken before God, knowing I am bankrupt in terms of righteousness. I have nothing in me to justify myself before Him — not even my most charitable acts. I need His righteousness.

With that, I realized I need to mourn for the impact evil has had, continues to have, and threatens to have in our lives and in the lives of all of those around us. I saw that we all fall prey to sin and that I should direct my hatred toward sin, while showing compassion on those it corrupts.

I rejoice that Jesus kept me and gave me sweet rewards for forgiving my Dad. My uncle told me that a plumber who had come to replace the water heater in Dad’s trailer witnessed to Dad and prayed with him to receive Jesus as his Savior.

I hoped it was true, but I wondered how I could know for sure. By now Dad was dying from cancer. The last time I saw him I asked if he knew Jesus. He said he did. Then for the first time in years since his stroke, he spoke without hesitation or stammering. He peered into the deepest part of my being and said, “I only wish I knew the Bible as well as you do.”

A tear slid down my cheek. “Dad, you already know everything you need to know, and soon you will know far more than I.”

The love we shared for each other in that moment would never have happened had I held on to my pain and bitterness. Forgiveness presented gifts more precious, more satisfying, than passing judgment or seeking retribution could ever bring.

I received the gift of freedom when I gave the Lord’s gift of forgiveness. That forgiveness opened Dad’s heart to salvation. Then I received another gift: the Dad I always wanted. It was a gift I could enjoy in this life and will enjoy in eternity when we see each other again.

Scripture quotations are from the New King James Version.

Total Forgiveness: When Everything in You Wants to Hold a Grudge, Point a Finger and Remember the Pain, God Wants You to Lay It All Aside by R. T. Kendall (Charisma House Publishing, 2002)

The Christian Atheist: Believing in God But Living as if He Doesn’t Exist by Craig Groeschel (Zondervan 2010).