Shirley Mozena is a retired teacher, author, speaker, and blogger. She has authored two books, Second Chances At Life and Love and Beyond Second Chances: Heartbreak to Joy, that were finalists in the Oregon Christian Writers Cascade Awards. Shirley has also published her writing in LIVE and The Columbian newspaper. She and her husband, Jim, facilitate a grief group at their church for those grieving the loss of loved ones. They live in Vancouver, WA. 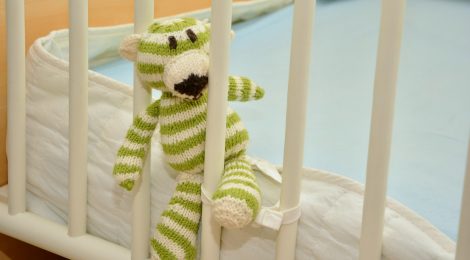 Letting go of a deceased infant daughter and taking hold of the God of all comfort.

“Mrs. Rudberg?” A dark-haired, petite young woman approached my bed. “I don’t want to upset you, but we need to know what to do with the body.”

I felt my much less-rounded tummy and knew for certain that my baby was gone. “I don’t know,” I stammered. What should I say? Emotionally drained, I said the first thing that came to my mind: “You take care of it.”

As she bustled out of the room, I stopped her with my quavering voice. “What was it?”

“It was a female,” she said matter-of-factly and continued out the door. Not “baby girl” but “female.”

The nightmare began a week earlier on a hot early June morning. The smell of blossoms filled the air, and the windows were open to the warm breeze. In my thirty-fourth week of pregnancy, I noticed my pre-born baby, resting near my heart, was quiet. Too quiet. The normally active, hiccupy baby didn’t seem to be moving.

Sometimes I’d give a nudge to what I thought was the baby’s bottom. “Come on, Carrie or Matthew. Wake up.” When people asked me whether I wanted a boy or a girl (in 1977 we didn’t know the sex of our babies until they were born), I always said it didn’t really matter as long as the baby was healthy. Secretly, though, I wanted a girl so our three-year-old daughter, Erika, would have a playmate and could share the same room.

After two days, I feared the worst: My baby was either extremely sick or dead. The nurse advised me to come to the hospital immediately.

In the exam room, my husband Bill and I watched as the nurse carefully put the enlarged stethoscope on my tummy. After she listened, with many tries, I was sent to ultrasound. I watched the little image on the screen, not knowing what it revealed.

Both Bill and I sat there, stunned. The doctor continued, “In order for your psyche to get used to this, we’ll let you go home and wait for a few days. The labor will most likely take place on its own, for the dead baby is toxic to your system. We will call you after a few days if labor doesn’t begin on its own, and then we will induce labor.”

We drove home in silence. I stared out the window, not seeing anything. How could this surprise pregnancy end in death?

Once home, I couldn’t remain still. Bill wanted to hold me, but I needed to move. To pace. It’s gone. It’s gone. My baby is gone! The tears would not stop.

I washed clothes the next day and hung them on the line in the warm summer sun. My family still needed clean clothing and meals prepared. Everyone I encountered when I went to the grocery store acted as if nothing were wrong, as though everything were normal.

But I dreaded bumping into someone I might know, wanting to protect them from the bad news. Nor did I look forward to the impending labor that would only produce a corpse and not a living, breathing little one.

The medical staff tried inducing labor for two days with no success, so they took the baby by Caesarean.

At home, Bill and I walked by what would have been Erika and the baby’s room. “I’m glad we didn’t set the crib up yet,” I remarked. Then I gestured toward the box of brand new baby clothes given at a recent baby shower.“What do I do with all of these things?” I broke into tears, and Bill held me tight.

One day that summer, a friend asked if I could watch her baby, and I agreed. As he fussed, I held him close to me, shushing him and walking around the house. I wept along with the little one.

Finally, after a year or so of mourning, I said to Bill, “I’m tired of talking about the baby. We need to give her a name.”

“We planned to name her Carrie if it was a girl. What about a middle name?”

We decided to call her Carrie Lynn. That seemed to salve my hurt a little, though the wound was still there.

Maybe I’ll always feel sad about Carrie, I thought. I was haunted by the fact that she had no resting place; I didn’t know what the medical staff did with her body. Even though I believed she would one day be resurrected, there was no marker to say she ever existed.

I remembered the story of King David who, when his infant son was gravely ill, would not eat or drink. But when he was told the baby died, he said, “Can I bring him back again? I will go to him, but he will not return to me” (2 Samuel 12:23).

I was comforted by the love Jesus Christ had for children: “Let the little children come to me . . . for the kingdom of heaven belongs to such as these” (Matthew 19:14).

I knew I’d see my daughter one day, but my heart still ached. My arms were still empty.

Years passed, and I faced more losses and sorrow: the death of my husband, after forty years of marriage, and the sudden death of my second husband seventeen months later.

But that sorrow also brought me closer to little Carrie Lynn. When I finally erected a marker with her name next to her father’s grave, I read her this letter:

I am so glad this marker is finally here to say you lived a life — though it was short. I was not allowed to see your little face, but I know I will see you one day. I’m so grateful that this life on earth is not the end but the beginning of eternity that never ends.

I love you, Carrie Lynn. Hugs and kisses from your mommy. She still loves you very much.

And at once, I felt the presence of the blessed Comforter, assuring me of His holy presence that would sustain me in the challenging days ahead, until the day I finally see my daughter.