Karen Foster writes for Christian publications, speaks to women’s groups, and serves as a jail chaplain for women inmates. Her passion is to share the satisfaction that only God can bring. Karen lives in Auburn, CA. Visit her website and blog at KarenFosterMinistry.wordpress.com. 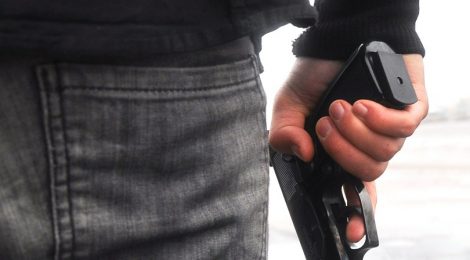 God can set anyone free from inner pain and unforgiveness.

by Wendi Johnson as told to Karen Foster

I pulled my baking sheet out of the oven and inhaled the sweet scent of chocolate chip cookies. When I bit into a warm one, my tears came — again. These cookies were bound for the male inmates in one of our state prisons.

Would one of the three men who’d killed my husband be eating them? I hoped so. But I never would have believed that thought was possible.

On September 27, 2005, my twenty-year-old son, Brandon, left a message at work for me to call him. I presumed he wanted to talk about a job interview he’d had that day.

I was wrong. Without explanation, he said, “Auntie Dawn is coming to get you.”

My heart froze. “Why is my sister picking me up?”

Brandon dodged my questions, but right before he hung up, he said, “Don’t worry, Mom. I’ll take care of you.”

My stomach lurched. I thought of calling my husband, Kim, but started shaking. What if something had happened to him? I pressed my hand over my mouth and ran to the restroom.

My sister arrived, her eyes red and puffy. “Where’s Kim?” I grabbed her hand. “Is he dead?”

She nodded. The room swirled, and I collapsed into her arms with a gut-wrenching scream. How could my husband be dead? I’d talked with him on the phone during lunch. Didn’t Kim say he’d left work early and was home? We’d joked and laughed.

Was it a heart attack? What if the gun he’d been cleaning for the hunting season had accidentally gone off? His final words — “I love you, darling” — squeezed my heart.

I leaned against my sister and urged her, “Get me home!”

Yellow caution tape sealed off my street. I stretched my neck to see beyond the police cars with their flashing blue lights. “Where’s my son?” I cried, pacing back and forth. “I want my son!”

Just then, Brandon ran up to me. Chests heaving, we clung to each other and wept. My son told me he’d come home and found Kim, his stepdad, lying on the basement floor in a pool of blood. He’d been beaten and shot in the head. Many of our electronics and guns were gone, including the handgun used to kill my husband.

My mind reeled. Who could be so cruel?

Two days passed before the police allowed me to go into my home. I was numb as they escorted me through the house and questioned me. When I entered our master bedroom, I gasped. The blue-gray T-shirt Kim wore the last time I’d seen him was splayed across our bed.

I grabbed the shirt — the closest thing to hugging Kim — and breathed in his clean scent. Tears flooding my eyes, I slumped like a rag doll on the bed and wept.

After Kim’s funeral, I moved back into the house with Brandon. We installed a burglar alarm, but it didn’t alleviate our fears. What if the murderer was someone we knew? I kept the alarm’s panic button with me at all times.

Nights were the worst. Unable to sleep, my mind searched for answers. I listened for the slightest sound, rushed to Brandon’s bedside whenever nightmares woke him up and he needed me. My only comfort was prayer and Deuteronomy 31:6: “Be strong and courageous . . . for the Lord your God goes with you; he will never leave you nor forsake you” (NIV).

A year after Kim’s death, the handgun was found, leading to the arrest of three men. However, relief morphed into impatience as I waited another year and a half for the trial.

During that time, Kairos Prison Ministry came to our church to organize an intensive weekend Bible study at one of our state prisons. They asked for volunteers to bake cookies for the prisoners.

I crossed my arms. I hadn’t baked cookies since Kim’s death. And I wasn’t going to bake them for some criminal. My back stiffened as I leaned against the cushioned pews. Preach the gospel if you like, but I want justice.

I rushed out of church and drove home. Although the men were behind bars, I double-bolted the door and threw my car keys on the granite kitchen counter. They landed with a clanking thud next to a package of store-bought cookies.

Bake cookies? I breathed deep and listened to Christian praise music to calm my nerves. Lord, it’s going to take more than a batch of cookies to soften my heart.

And then I had to face my enemy. For seven days in September 2008 I sat in the courtroom behind the two men who killed my husband, and stared at the back of their heads. The third man had already pled guilty and testified at the trial.

As I listened to the prosecuting attorney, I learned the men had needed money, mistook our house for someone else’s, and thought the place was empty.

“If only’s” replayed in my head. If only the seventeen-year-old who pulled the trigger had stayed in school that day. If only they’d entered our neighbor’s house, my husband would still be alive. If only Kim’s pistol had been in the gun safe.

I’d never seen the crime scene photographs until the trial. Now, seeing the horror of Kim’s final moments crushed my heart. I wept countless tears. My anger grew. I kept waiting for the men to face me. Beg for my forgiveness.

Even when I was on the witness stand and excused myself because I became sick to my stomach, their cold, dark eyes stared straight ahead as though I were invisible.

The jury found the men guilty of first-degree murder, and they each received a life sentence.

End of story, or so I thought. Negative thoughts consumed me. I tried to forget the past for the sake of my family and health. I even volunteered to bake cookies for Kairos Prison Ministry.

As I stirred the chocolate chips into the dough, tears rolled down my cheeks. What would Kim say if he saw me baking cookies for convicted felons? I wiped my eyes and set the oven timer. Lord, make my spirit as sweet as these cookies. Use them for Your glory.

As the scent of chocolate chip cookies filled the kitchen, I prayed for the men who killed my husband. I prayed for them by name. They weren’t evil men. The poor decisions they’d made in life became a domino effect that led to Kim’s death. Now they suffered the consequences.

Maybe I could forgive them, but my heart needed more time than it took to bake several dozen cookies.

My prayers were answered, but not in the way I expected. My son had become addicted to prescription pain pills he’d taken for a sports injury, and he wanted something stronger to purge the memory of finding his murdered stepfather on the floor.

Six years to the day of Kim’s death, Brandon was arrested for the possession of illegal drugs. He called me from jail. His breathless voice quivered like a frightened child’s. “Mom, get me out of here.”

I couldn’t get there fast enough. When I saw the dark circles under his hollow eyes, my body swayed; I had to look away. A thick glass window separated us, and we used a phone to hear each other.

I offered to post bail, provided he went to a Christian rehabilitation program. Brandon agreed but realized it would take about a month to get accepted.

When our visitation ended, Brandon stood up to leave and looked back at me over his sunken shoulders. His pleading eyes, filled with despair, yanked my heart. I bowed my head and sobbed. I loved my son, but only the Lord could save him. He needed God’s grace — the same way I did.

I thought of the other men sitting in prison. Where was their hope? Did they know about God’s grace?

Visiting my son in jail roused my compassion for prisoners. In addition to baking cookies, I hosted an annual hayride and invited the community to bring toys for the Angel Tree Program.

But my heart wouldn’t rest until I wrote the men who murdered my husband.

“God loves you, regardless of what you’ve done,” I said. “I’ve forgiven you, and God’s willing to forgive you if you turn to Him.”

The following month, I gasped when I opened my mailbox and saw the envelope’s return address. My hands shook as I read the prisoner’s neat, handwritten letter. “I’m sorry for all the pain I caused you and your family. Thank you, Wendi, for your letter. I prayed for a sign that I’d been forgiven.”

I clutched the letter to my chest. How long had I waited for an apology? As if “I’m sorry” could ease the pain. All along, this man had been praying and waiting too. The young man who pulled the trigger also replied with heartfelt words that made me weep. God had been working in all our lives to heal, redeem, restore.

When another organization, Forsyth Prison Ministry, asked for volunteers to participate in their services at Cherry State Prison, my hand went up. On a summer evening in 2014, I walked through the metal detector of that prison with a plate of cookies and a heart filled with praise. The next year, I shared my story.

My knees wobbled like Jell-O as I stepped in front of a hundred inmates. Their eyes widened as I described Kim’s ghastly death and how that led to my son’s drug addiction. I told them I’d forgiven the men who killed my husband and continued to write them. Some inmates wiped their eyes. Others slowly shook their heads.

“For all have sinned and fallen short of God’s glory,” I said, referencing Romans 3:23. “No one is beyond God’s love and grace.”

The men gathered around me to shake my hand when I finished speaking. I longed to ignore the prison rules and hug them.

People ask how I could forgive the men who killed my husband. Sometimes, I ask myself that question when I see Kim’s shirt tucked in my dresser drawer. Or when I bake chocolate chip cookies for prison ministry.

I tell them God’s love softened my heart, one batch of cookies at a time.