Yvonne Kays writes inspirational short stories and poetry and co-facilitates Writing from the Heart, a Christian writing support group that meets monthly. Since retiring from substance abuse prevention work in 2010, she has been published in LIVE, God’s Word for Today, The Plus Years, The Christian Journal, Chicken Soup anthologies, and James Stuart Bell’s book, Encountering Jesus. Yvonne is married and lives in Bend, OR. 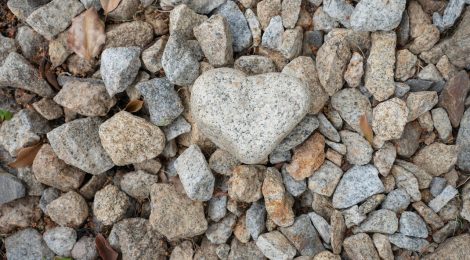 Message to the Heart

How God uniquely communicates in our time of need.

Gravel crunched under my shoes. Deep in thought and with a heavy heart, I hiked along a sandy trail through the high desert near our home in Central Oregon.

I cried out to God. Please, please, Lord, bring our family home. Protect our grandchildren, and keep them all well.

A planned three-month trip to Africa to adopt a precious little girl who had sickle cell, and had stolen their hearts, had morphed into a five-month test of faith.

My husband’s daughter and our son-in-law had felt led by the Lord to plan a trip to Uganda with our four grandchildren, ages six to fourteen, to meet their new sister-to-be. They would also minister to other orphans while they were there.

When my husband, Keith, and I heard of the plan, my heart lurched.

Keith’s daughter, her husband (a physician’s assistant), and our oldest grandson had already made two short-term mission trips to the underdeveloped region of Northern Uganda to serve orphans and provide medical assistance in the bush. We’d celebrated the stories of blessings with them, but cringed at the dangers and difficulties they’d experienced.

“I think we should pray about whether or not we should offer to go with them,” I’d said. “Just having extra hands to care for the children could help.”

But after prayer and several discussions, we felt led not to go because of our age and health issues. Possibly our family would end up taking care of us, an additional burden and concern. Our role seemed to be at home, providing encouragement and prayer support.

So, the odyssey began. Only two weeks after our family’s arrival in Africa, doors seemed to open. They received court approval to foster Daphine while they worked through the adoption process.

The family began to bond. Even washing clothes was a family event, all done by hand and on foot. Weeks passed. As they chose service and joy every day, our kids’ faith inspired us, expressed in pictures and in their slogan, #waiting well.

Typhoid. My only reference was memories of children succumbing to it as wagon trains rolled westward across our country, graves littering the trail. Fear raced through me, but panic subsided when I learned modern medical advances could now relieve these maladies in the early stages.

Our granddaughter responded rapidly to treatment. Food choices were limited, safe and healthy options difficult to find. Various digestive issues began to surface in the family. Even eggs had to be hand washed thoroughly.

Daphine suffered a major sickle cell crisis after the family traveled to the capital city of Kampala for the court hearing on the adoption. In Northern Uganda there had been no hospital with capacity to care for her, and only God knew that both her new parents could donate the blood she needed for survival.

With Daphine in extreme pain during a three-day hospital ordeal, morphine, powerful antibiotics, and much prayer proved necessary for recovery.

In addition to this, the judge assigned to our family suddenly refused to take any cases involving adoption. Weeks passed before another judge agreed to hear the case.

Finally, the long-awaited day came. A court hearing convened, and the family requested approval to adopt Daphine based on her medical needs, the lack of adequate care for sickle cell in Uganda, and the love of her new family for her. The judge asked some question and took the information to review.

The wait began anew. Another month elapsed, and still no ruling. Repeated requests went unanswered. And the judge was now unavailable for another week, reportedly due to a funeral. Our family was discouraged, and we agonized with them.

As I walked, I pondered my morning devotional, a reminder that sometimes we are doing exactly what God asked us to do when trouble occurs. In times past, I have wondered, “God, did I hear You right?” when nothing but difficulties loom.

After the feeding of the five thousand, Jesus told the disciples to go across the Sea of Galilee. They obeyed, all getting into the boat and heading out, only to run into a terrible storm that threatened their very lives. Was this what God had planned for them?

Still on the land, Jesus saw the disciples straining at the oars and walked to them on the water. The result? The men saw His deity, grew in faith, and worshipped. His ways are mysterious, certainly above ours.

Gifts from the Father

As I looked down, my ponderings momentarily halted. I spotted another heart-shaped rock laying by my foot, and stooped to pick it up.

I’d learned to see each heart rock as a gift from my heavenly Father, a token from Him reminding me that I am His beloved, a cherished daughter despite my mistakes, imperfections, and foibles. I am loved just as I am.

Today was unusual. I’d previously seen two large heart-shaped rocks along the trail, too big to bring home, and had snapped a picture of each one. And then along the way I’d picked up several little ones.

I reached into my pocket and pulled out all the heart rocks. One, two, three, four, five small hearts lay on my palm. And . . . two big ones earlier. One for each member of our family in Africa — mommy and daddy and five little ones.

They were His beloved ones also. I felt as if God was saying, “They are in the palm of My hand. I know what they are going through. I’ve got this.”

As I looked up into the blue sky, I startled to see a cross formed from two jet plane contrails. And I heard words in my heart: It cost Me a cross.

Tears flowed as I considered the cost of obedience Jesus had paid. He said that we must be willing to obey and bear our cross — nothing in comparison to the price He had paid.

I smiled through my tears, for He promised to never leave us and to never give us more than we can bear, with His help. A prayer of gratitude flew upward.

Thank You, Jesus, for sending a message of hope today. I know You hold them all in Your hands, and I trust Your timing to be best. Give us all peace in waiting.