Alma Barkman was a contributing writer to Daily Guideposts for sixteen years and has had numerous articles and poems published in a wide variety of Christian and secular publications. She has also authored nine inspirational books, including Peeking Through the Knothole, Everyday Moments with God, and Two Old Goats and One Good Shepherd. Alma lives in Winnipeg, Manitoba. 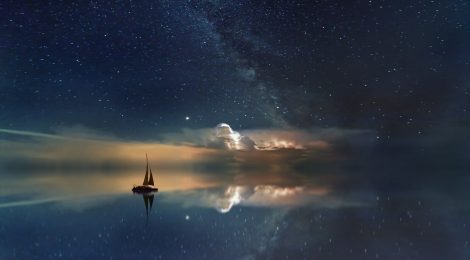 Whatever else dementia had stolen from him, my husband, Leo, still recognized me. From his wheelchair beside the nursing station, he beamed with delight each time I stepped off the elevator, and the staff smiled knowingly.

Caring for Leo at home the past five years, I had slowly, regretfully watched him inch down that decline into the abyss of dementia. At first there was only his confusion as to the days of the week, then occasional disorientation, then the failure to recognize familiar people.

Leo gradually lost initiative in gardening, house upkeep, and car repairs — things he had always done. He could not remember the deaths of his siblings, and grieved for them anew each time I had to explain they were gone. As time went by, he started to dress himself all topsy-turvy: four sweaters, socks over shoes, pajamas under pants. But he complied when I helped him.

The last six months, however, Leo’s condition deteriorated rapidly. On a frigid January night, he decided to go outside to start the car, wearing no jacket, mitts, hat, or overshoes. In the interest of safety, I had long before swapped his real car key for a fake one. When his attempts to get the false key into the ignition failed, he became irritated and angry.

Determined to “go home,” Leo started walking down the driveway into the vicious northwest wind. Fearing for his safety, I called the city police, who kindly escorted us to the hospital, where he was admitted.

I knew this day would come, but the reality of it was the difference between expecting a punch and feeling the blow.

After fifty-eight years of marriage, I walked out of the hospital carrying Leo’s tweed hat and fuzzy coat — the ones he always loved and that suited him so well — and I had the feeling he would never come home again.

And I was right.

My adult son and I drove home in silence, struggling to maintain composure. I inserted the key into the back door. Leo’s old work shoes were lying there to greet me, his ragged old work sweater in the closet. I fell into our son’s arms and sobbed.

Shuffling down the hall, I passed Leo’s music room, with the star quilt and the orange thermal blanket, the Bose radio preset to classical and sacred music stations, his old Bible ragged from use, a pile of hymn books on his desk.

Leo had been a church music conductor, starting at age sixteen. Now there would be no more pleasant mornings as he listened to his favorite songs while I quilted — nobody to admire my handiwork or check my progress.

Exhausted, I crawled into bed, where for over fifty years I had fallen asleep with my head resting in the crook of my husband’s arm.

It was here our four children had been joyfully conceived. Leo had cradled and comforted each newborn in his muscular arms, tears of wonderment brimming in his hazel eyes. As the children grew, he had diligently taught each one of them piano, giving them lessons and supervising their practices until all four were accomplished pianists.

Of late, music was the one thing that reassured and comforted Leo when he was confronted by the many imaginary fears generated by dementia.

I fell into a fitful sleep, only to keep waking because I thought I heard Leo roaming about the house.

Come the morning, I set the table for one. No more bowl of porridge, two slices of toast with peanut butter, a cup of decaf coffee, cream but no sugar — his usual breakfast.

I ran the water into the sink and imagined I heard Leo shuffling down the hall to dry dishes. It’s what he’d done every day since he had taken early retirement.

Next to God, family, and music, he loved the suburban bungalow we’d built together fifty years ago, the garden, and his car. He enjoyed road trips because they gave him an excuse to update our cars. And there had been many.

About three months after Leo had been admitted to hospital, I was asked to sign the paper paneling him for a nursing home. Despite authoring nine books and publishing hundreds of articles, putting my signature on that consent form was the most difficult line I have ever written.

I doubt if any divorce papers or even death certificates have ever been dampened with so many kinds of tears — tears of regret, tears of doubt, tears of loss, tears of anguish, tears of betrayal, tears of separation. I felt I was abandoning my husband, even though I visited him at the hospital twice a day, always to be greeted by those same three words: “There she is!”

At one point a nurse told me Leo’s vital signs were so stable, he could live for years. Would he have to linger in this state for that long? I wondered. And how could I continue to bear up under the emotional strain?

Ephesians 6:10 came to mind:“Be strong in the Lord and in the power of His might” (NKJV). And God was good, providing daily support through the hospital staff, my family, my friends, and my faith.

Nevertheless, there were times I felt lost and in limbo. When those times came, the words “The eternal God is your dwelling place, and underneath are the everlasting arms” took on new and profound meaning (Deuteronomy 33:27, ESV).

The day came when I went to visit Leo and found him in physical distress, his breathing labored. I stayed with him long into the night and returned early the next morning. My son, Lyle, and his wife, Kathy, kept vigil that afternoon while I went home to grab some sleep.

I was just about to lie down when Kathy phoned. “You better come, Mom. There’s been a change.”

Ten minutes later I was at Leo’s bedside, but too late. Kathy said he had kept reaching up, reaching up. Then he opened his eyes wide, exclaimed, “Angels!” and took his last breath.

While I was disappointed I had not been at my husband’s bedside, such a unique home going serves to soften my sorrows and reinforces my belief in our eternal home. Jesus said, “I am the way, the truth, and the life. No one comes to the Father except through Me” (John 14:6, NKJV).

On that basis, I fully expect on the day I see God, the angels will smile knowingly as I step onto that eternal shore. And Leo will exclaim with delight, “There she is!”