Jewell Johnson has published numerous articles and poems, as well as three devotional books for women. She and her husband, LeRoy, have six children and nine grandchildren, and live in Fountain Hills, AZ. 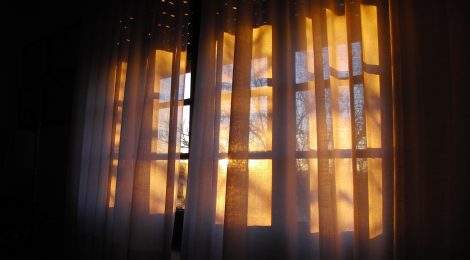 Fear doesn’t have to hold you captive.

nowwhat / October 1, 2017 / Comments Off on Prisoner at Home / Bible, Uncategorized

“You and the kids want to come with me to town?” my husband asked. Lee lounged at the kitchen table, warming his hands on a coffee mug.

I stopped folding laundry. My hands froze in midair, and my heart pounded like a jackhammer.

“You’ve been cooped up all winter with the kids,” Lee continued. “It will be good for you to go into town.”

Lee knew how I loved to get out of our little town and shop in a bigger city. But this winter had been a difficult time. I had stayed home since Christmas while our six kids took turns having chicken pox, earaches, and colds.

Now it was spring, and I should be dying to go places. For some reason — I couldn’t define the feeling — I wanted to stay home.

My mind traced the twenty-five miles to the nearby city where Lee planned to go. We’d pass ranches, fields, and pastures and drive over three sets of railroad tracks.

A picture formed in my mind: our car stalled on the railroad tracks as a locomotive barreled toward us. My thoughts shifted, and I saw bloody bodies — the children’s and mine — splattered across the tracks.

Lee looked at me queerly. “OK, I’ll be back in a couple hours.”

Over the past months, I’d settled into a comfortable pattern of being a stay-at-home mom. When I thought of traveling anywhere, I felt anxious and found excuses to stay put.

Since Christmas, Lee had been doing the grocery shopping. I went to church, but most of the time the children and I walked. At times I had to travel to doctor and dentist appointments. Before those trips, I became agitated and my mind filled with fearful imaginations of head-on crashes and train-car collisions.

Because the problem had come on gradually and I’d been caring for sick children, I hadn’t seen those fears as a problem. Until now. Shall I tell Lee why I can’t go with him? I wondered. No, he’ll think I’m losing my mind.

I’m the only person in the world with such a crazy notion, I told myself that day. This may be the start of a dreadful disease, but I can’t tell anyone how I feel.

I usually prayed about our family’s problems, but I was too ashamed to talk about this — even to God.

A few weeks later, a neighbor invited me to her house for a Bible study. Afterward, I visited with Vicky, another guest. She told me she was alone with her four children during the week while her husband traveled.

“What do you do while he’s away?” I asked. “Do you get out a lot, go shopping and visiting?”

Vicky laughed. “No . . . you see, I have this crazy idea that if we get on the highway, something terrible will happen to us.” She pulled her toddler close to her. “Stupid, isn’t it?”

I stared at her. Someone else has the same problem? It was as if the boulder on my shoulders crashed to the floor. I wanted to hug her. I wanted to shout, “I’m not crazy after all!”

I said nothing, yet I felt encouraged to learn other people also feared leaving their homes.

Despite the encouragement, I couldn’t stop thinking through the situation. How will my anxiety affect our children? How embarrassing for them to explain to their school friends that their mother never attends spring concerts or basketball games.

I realized that was just the tip of the problem. This fear would have a major impact on my family’s future.

That day I reached a decision to deal with my problem. But where would I start?

I began by understanding where my fear was coming from.

When I was five, an incident happened that left a definite mark on my young memory. On a sub-zero January morning, the phone rang at our home. My mother answered and screamed, “No! No! It can’t be!”

My uncle’s pickup had not started that morning. A friend driving a truck pulled the pickup in an effort to start it, while Uncle Victor steered. As the pickup straddled a railroad track, the truck stalled.

Frost on the windows prevented Uncle Victor or his friend from seeing the approach of an early morning freight train. It crashed into my uncle’s truck, and he was killed instantly.

More important than understanding where the fear had come from, I wanted to get rid of it. I finally turned to God for help.

Several times a day I’d repeat Bible verses that confronted fear — verses like “Don’t worry about anything; instead, pray about everything” (Philippians 4:6) and “For God has not given us a spirit of fear and timidity . . .” (2 Timothy 1:7). These words assured me God didn’t want me controlled by fear.

I also found comfort learning that there are at least 365 “fear nots” in the Bible, one for every day of the year. I claimed them all.

One day while browsing in the library, I ran across several books about phobias, and a new world of information opened to me. I learned that my particular fear was a form of agoraphobia, the fear of being in places where you feel trapped or helpless. This phobia can take many routes, such as fearing being alone to fearing being in crowded places, like elevators and trains.

I also discovered that most people with agoraphobia are women between the ages of 18 and 35 — my age. For some, the fear causes headaches, nausea, palpitations, or severe perspiration. For other victims, the fallout is more severe: They are held prisoner, locked inside their homes.

At that time, our local newspaper carried a story of a woman with an extreme case of agoraphobia. Fear controlled her so that she could not walk outside to her mailbox. In spite of counseling, she had not been to a mall or grocery store for five years.

Will this be my fate? I wondered.

I made an all-out effort to take charge of the fear. I tried not to focus on negative situations. When I read the newspaper, I avoided reading of tragedies. I also thought of the thousands of people who drive every day and never have an accident.

My resolve was tested one winter afternoon when our family drove to a nearby city to shop. As we finished our errands, it began to snow.

Driving out of town in the whirling snow, we approached a railroad track with no guardrails. From previous snowfalls, ice and snow had accumulated, making deep ruts on the tracks. I peered through the side windows to see if a train was nearing the crossing.

“Careful,” I told Lee. “Those ruts are deep. Won’t the car get hung up on the tracks?”

In the middle of the tracks, straddling ruts of ice, the car lurched and the motor died. I screamed and flung the door open. “Get out!” I yelled to the children. “A train is coming!”

Lee looked both ways. “No train in sight,” he said. He got out and calmly looked under the car. “Get in!” he said.

My husband roared the motor, and the car jumped over the bumps. I huddled in the front seat sobbing, while the children sat silent in the back.

When I calmed down, I realized that for the first time, I’d admitted my problem. Although Lee couldn’t relate to the fear, he tried to understand. What a relief that I’d finally confided in him.

It has been several years since the onset of agoraphobia in my life. Although this phobia may always lurk in the shadows, I will never allow it to control my actions.

Lee and I take trips. I attend the children’s school events, determined that fear will not hold me a prisoner. With support from my husband, increased knowledge of my problem, and God’s help, I’m winning the battle over fear.

Scripture quotations are from the New Living Translation.