Sally Clark has published stories in Purpose Magazine, Hurray God!, Chicken Soup for the Soul: Devotional Stories for Tough Times, Indeed: Exploring the Face of God, and other publications. She is also a poet and the author of one lift-the-flap board book, Where’s My Hug?. You can read it at https://www.youtube.com/watch?v=43zciG7hap8 and order it at https://tinyurl.com/y7f4stmz. Sally lives in Fredericksburg, TX. Learn more about her at http://sallyclark.info. 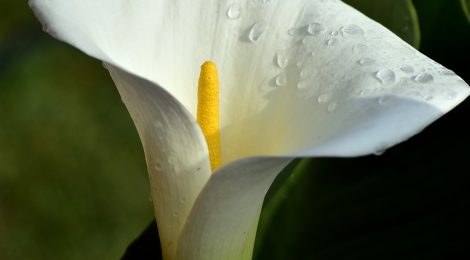 Someone lost, something found.

“We’ve got to go. Now!” My husband leaned over the carved ash choir rail and whispered insistently.

“Why?” I asked in hushed tones. “The service just started.” People were starting to stare, losing their place in the church’s opening hymn.

“Now! There’s been an accident.”

Our twenty-year-old son and his eighteen-year-old fiancée were going to church that morning with her family. That’s what we thought.

Rushing out the church doors and into the car, my husband explained that Doug had picked Krista up. But as they were driving on one of the highways headed out of town, the car flipped over and they were both injured.

The hospital would not give my husband any details, just that we should come right away.

Thank goodness we live in a small town; the drive to the hospital was a short one.

Krista’s parents and brother walked through the emergency room doors at the same time we did. We didn’t speak — only stared at one another. A doctor met us at the door and asked all of us to follow him into a room down the hall.

That’s where he told us that Krista was dead, her body thrown out the passenger’s side open window and crushed when the car rolled over on her. Doug’s injuries were not serious.

Clutching her husband and son, Krista’s mother began to cry and then scream.

My head kept saying this could not be true, but my heart told me it was. What’s more, my heart was telling me that God was real. Totally real. God was more real to me in that moment than the flesh hanging from my son’s ribs. There was no more doubt.

In the emergency exam room, Krista’s mother held my son and said, “Thank you, Doug. Because of you, Krista died in the arms of someone who loved her.”

God was certainly real enough to Linda. She did not blame my son for her daughter’s death. She believed that God had numbered her precious child’s days before she was born.

At the funeral parlor, I watched my son stand at his fiancée’s coffin for four hours. “Son,” I pleaded, “you need to sit down. Your wound will start to bleed again.”

I thought then that I knew something of what Mary must have felt, standing at the foot of the cross, agonizing what possible good could come from such an untimely and violent death. I knew now that Mary would have given anything to have taken Jesus’ pain, but she couldn’t.

In the following weeks, our tears came as easily as breathing. My husband, my son, my daughter, Krista’s family — we all suffered more than we thought we could stand. It drove me to my knees for the first time in my life.

“What do I do, Lord? How can we get though this?” I pleaded. The answer I received silenced me.

I don’t think I actually expected God to answer me, but this was certainly not anything I had imagined I would hear. These were not my words or thoughts, I knew that much. And how was knowing God better going to be of any help in our present circumstances?

I thought I knew who God was. I had attended church, off and on, all my life. I was baptized as an infant and confirmed when I was a teenager. I sang in our church choir. My husband was president of the Administrative Board. If you had asked me the day before the accident if I were going to heaven when I died, I would have answered, “Well, I hope so.”

That’s what my faith was: a hope that everything I’d heard and everything I’d been taught was real. But it was only a hope, not a certainty — not anything I knew with confidence from personal experience.

Back to the Bible

How, I wondered, was I supposed to know God better?

The answer lay in the bottom of my nightstand, under the city phone directory and the warranty booklets for our TV and telephone: the Holy Bible. I had heard God’s voice, inside my own heart, for the first time, and He was inviting me to know Him in ways I had never known Him before.

The mainline denominational church I attended used the Bible. At least there was one in every pew. And the preacher quoted from it at the start of every sermon. When I was a little girl, I loved the promises in Revelation of golden streets, pearly gates, and precious jewels. As an adult, I stumbled upon an occasional quote from the Psalms that comforted me.

But I never thought of the Bible as God’s personal words to me, a working mother with two teenage children, a stressful marriage, a demanding business, a large home, and an accelerated appetite. Now the knowledge of God’s existence had rearranged every priority in my life.

When I went to church, I tried to sing, but I choked on the words of every hymn and cried through each one. Suddenly, I knew what they meant. I felt the weight of every word, the heart of every note.

I sat in the last row in the sanctuary, in the seat closest to the door, so I would cause as little disruption to the service as possible, tears slipping out of my eyes in a disturbing mix of grief and joy. I had heard of “a peace that surpasses all understanding,” and now I experienced it, leaving every service in a jumble of exhausted strength.

And I began to read. I devoured the Word like a starving woman at a banquet. The more I ate, the hungrier I was. I began to search for more Bible teaching in the church I attended, but it was not available there.

So I asked God to show me where He wanted me to go to learn more about Him, and He did. I will always be grateful to the first church I attended, for the steppingstone it was in my faith. But now I wanted to swim deeper, hold my breath longer, skim the surface of accepted understanding less often.

And the closer I got to God, the harder my life became.

In the days ahead, our son moved out of our house, and my husband slipped into a depression that therapy helped, but didn’t cure. Thoughts of suicide began to tempt him.

Our son struggled with dangerous addictions. On more than one occasion, the police were at his door. Our daughter graduated high school and married, but the marriage was difficult and ended in our son-in-law’s suicide. Once again, I watched one of my children stand at the coffin of someone they loved deeply.

I attended every Bible study and prayer group I could fit into my schedule. The emergence of my faith had certainly not made my life easier, but I was learning to hold on to what I knew was Truth.

And I did hold on. Eventually, things began to get better. A new therapist was of more help. Our marriage became stronger than I had ever imagined, and our love for each other deepened. Our son met another woman and they married, but that relationship ended in divorce.

Then he met a quiet, beautiful woman with a small son and married again. He is happy now with a son and a daughter, a stable home, and a good job. Our daughter became a single mom, but then met a man with a good heart, married him, and had two more daughters.

Today, years later, all of them attend church, and I hope that one day God will call them to know Him in even deeper ways. I pray the circumstances will not be as painful for them, but I know that I have no control over what God will do, only faith that He is good.

Krista’s family has moved on, too, adopting a little boy and welcoming a new daughter-in-law and five grandchildren into their hearts. They attend the same church as Doug and his family.

None of us will ever forget Krista; we live with her memory every day. And I live with the humility of knowing that my faith came to life through her dying, for somewhere in her death, I found resurrection.