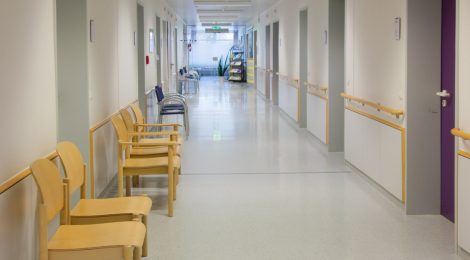 Seeing With Eyes of Faith

With God, things are not always what they appear to be.

nowwhat / November 1, 2017 / Comments Off on Seeing With Eyes of Faith / Home and Family - General

It seemed like a typical spring afternoon. With the sun beaming and my preparing to leave for a new job, I was in high spirits.

Everything at home seemed normal as well. My brother, Anthony (age 35), had left for Wesley Life Skills, a day program for adults with disabilities. He has suffered with epilepsy for several years. My mum lives with me so we can both care for him.

As I stepped outside, I inhaled the sweet magnolia fragrance while I waited for the bus. Then I rang Mum and asked her how things were going at home.

“Anthony’s day group rang and said he’s in the hospital after he had an epileptic fit in the pool. But they assured me he would be OK.” Although Mum tried to mask her worry, I could hear the heaviness in her voice. Trying to ease her troubled mind, I promised to ring the hospital after work.

Anthony’s seizures started at age twelve and occurred only when he pressed his face against the TV while it was on. Because he hadn’t had a fit for a long time, the neurologist advised that he go off medication. So I thought it odd that Anthony would experience a seizure in the pool.

I didn’t give it too much thought and got on with my day.

However, I couldn’t shake this feeling to contact the hospital for an update. When I recovered my phone out of my locker, I found missed calls from the emergency room doctor.

My heart started to race, and I rang the hospital immediately. Through the doctor’s medical jargon, I deciphered that by the large amount of water in his lungs, Anthony had suffered oxygen deprivation. He had nearly drowned.

Is he going to recover? I wondered. Stopping the doctor in her analysis, I blurted out, “He’s not going to die, is he?”

“At this stage, we don’t know.” The seriousness in her voice stabbed me. My legs felt as though they were buckling. Grabbing the locker door, I stared out the window, almost in a trance.

I had read that drowning is quick and silent, although the distress it causes is more visible. A drowning person cannot get enough air to shout, call for help, or seek attention. Because Anthony is non-verbal, his distress was heightened. Tears welled up in my eyes when I thought about how scared he must have been.

I had also read that the instinctive drowning response is the final set of autonomic reactions in the 20-60 seconds before sinking underwater. To the untrained eye, it can look similar to calm, safe behavior. This is why Anthony’s care worker thought he was floating. When he noticed something was wrong, another worker jumped in and revived him.

I gathered my things and rushed to Holsworthy train station for the seemingly long trip to the hospital.

When I arrived, the hospital halls seemed to close in on me, and a fist tightened around my heart. The familiar faces of Anthony’s day program coordinator and another care worker brought comfort to me.

By now, my brother had been transferred to the Intensive Care Unit, where specialized staff treated and monitored him. I knew that if Anthony didn’t get better in ICU, he wouldn’t survive.

When I entered the ICU waiting room, a nurse reported that Anthony was stable, stilling my anxious mind. Because of the near drowning, he had been put in a medically induced coma.

I forced myself to walk through the cold, sterile corridors toward ICU. What I saw was surreal, and the shock of it robbed me of speech.

My brother lay deathlike on the hospital bed. His eyelids were puffy and his body bloated from swallowed water. Tubes and wires were attached to him. I could hear the life support machine beeping, along with Anthony’s breathing. His face, pale, lacked any life.

My stomach churned, and I felt as though my heart had been ripped from my chest.

I gently stroked Anthony’s arm, being careful of the inserted needle. His face looked like a stranger’s, not that of my angelic brother.

Anthony had been born with an intellectual disability. Developmentally, he is like a child with a beautiful innocence about him. So from an early age I helped my mum look after him. Anthony and I naturally developed a close bond, so much so that I see him as a son as well as a brother.

In that moment, time shut down, and my world became unbearably still. No words could fill the void; speaking would only increase the pain.

I needed answers — even a thread of hope to stitch together the torn pieces of my heart. But when I asked the doctor about the prognosis, he wasn’t sure if Anthony would survive. Shivers ran down my spine.

Once I finally arrived home, the weight of the day’s events forced me to my knees. Unable to hold in my emotions, I cried out, “Please, God, don’t take my angel away from me!”

Suddenly, a strange calm cocooned my shaking heart. Instead of focusing on the physical evidence that seemed hopeless, I focused on God’s Word and sensed His comfort strengthening my faith. A specific scripture spoke to me: “The peace of God, which transcends all understanding, will guard your hearts and minds in Christ Jesus” (Philippians 4:7, NIV).

Despite the medical odds, I knew God would see Anthony through this.

The next couple of weeks consisted of regular visits to the hospital from family, friends, and care workers. They offered condolences, prayers, and support.

I made many phone calls in between visits to learn of any progress in Anthony’s condition. But he remained comatose.

The next time I visited my brother, I noticed more color in his face and less swelling. Were the prayers working?

I caressed his face and whispered, “I love you, beautiful. You are so brave.” I sat there gazing, hoping to hear a murmur or see his eyes open — any hint of consciousness.

Then Anthony squeezed my hand, yawned a few times, and twitched his eyes. I couldn’t believe it! Though small, these signs of life affirmed to me that he would recover.

Because of his disability, my brother didn’t know what was happening. But we did. As soon as I arrived home, I told Mum the amazing news. Tears welled in her eyes. She knew that God would come through, despite what the doctors said.

From then on, Anthony made a speedy recovery, breathing on his own within four days. The ECG test results were also positive. What a miracle, considering the doctors said he might suffer brain damage!

Anthony was eventually transferred to a ward in the hospital. When I first went to visit him, I saw him sitting on his bed alone in the dark room, quiet and withdrawn. I opened the curtains to let in some light. I squinted from the intense sun.

This image inspired me to bring another kind of sunshine to Anthony’s life: music, one of his loves. The following day I brought him a radio. When I played it, I sang and danced for him — just the medicine he needed.

Every time I visited Anthony, his face changed from somber to excitable. I spent many hours feeding him, conversing with the nurses about how he was doing, and being a loving presence in a lonely ward.

A few days later, we received the incredible news that Anthony was coming home. I felt as though it were the first day of spring after a hard winter. God had turned my mourning into joy!

Since then, I have not ceased to thank God for His blessing of supernaturally restoring my brother to life. Anthony has had no complications and is back on epilepsy medication, living a full, healthy life.

I too am living a full, healthy life — spiritually. I’ve learned that God’s light shines through the darkest times when we fix our eyes on Him instead of on circumstances. With stronger faith, I can trust God no matter what trial comes my way.