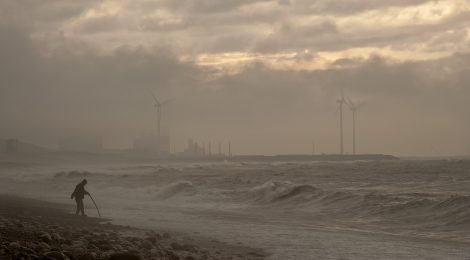 “Floating coffin,” said my husband as we watched the small boat head out to sea with our son, Rory, and his friends in it. We were supposed to be sailing with them to Jakarta, Indonesia. Instead, we remained on a small island about fifty miles away.

Rory was a pastor in Jakarta, and he felt he needed to return to his church. He tried to get us to go with him, but my husband and I saw that the small boat had only one door to enter and exit. There were no emergency exits.

I envisioned all the passengers trying to get out the door as the boat filled up with water. Only someone at the very back of the boat would be able to escape. If the door would even open.

Rory, why did you get on the boat?

Assessing our immediate situation, my husband and I realized we were nearly out of cash. Our cell phone didn’t have international service, and the ATM was restricted to local Asian networks. Rented rooms were cash only (Indonesian rupiahs), and nobody changed money on the island or seemed to speak English.

We appeared to have rather limited and unrealistic choices. For the next day or so we could eat the half package of crackers on hand, sleep under a picnic table, and pay the boat fare (also cash only) or stay in a room, eat a bit more than crackers, and beg to pay our fare once we landed in Jakarta.

Inwardly, I screamed in despair. Outwardly, tears welled up in my eyes. A pleasant holiday of snorkeling at a private resort island had turned into an impossible nightmare.

Although my husband didn’t look much happier, he offered hope: “Even though the situation looks impossible, the Bible says with God all things are possible. He promised to take care of us. We are going to pray and then act like God will do what He said.”

After we prayed, my husband decided we should rent a room.

A short while later as we sat on its porch, a young man approached us. He began speaking in heavily accented, broken English. He said his name was Berrie and that he was a friend of our friend, Miss Rose, who had sent him to help us. We didn’t know a Miss Rose.

We thought Rory had sent Berrie to help, but he was adamant it was Miss Rose. Seeing our confusion, the young man who rented us our room came to assist. His English was also difficult to understand, but I got excited, thinking he said we could use a credit card for our room.

Maybe we would make it off the island! However, when I actually pulled out my credit card to pay, the man rejected it. Rupiahs only. My heart dropped.

But Berrie didn’t give up trying to communicate with us. He had been talking to Miss Rose on his phone. At one point, he gave the phone to my husband, and Miss Rose identified herself.

She turned out to be a woman from my son’s church, whom we knew as Gugu (the Mandarin word for aunt). She owned a travel agency and was making arrangements for us, she said, but we didn’t know what they were.

Finally, my husband asked to use the phone to call Rory.

Amazingly, he answered, and our earlier fears about the boat were realized. It could capsize any minute, Rory said. Large waves were tossing the boat about. The hatch had opened, and water was coming in.

But even in the midst of believing he might very well drown, Rory had contacted Gugu to help us. He thought he might die shortly, and he was still taking care of his parents.

Later, we were grateful to learn that Rory’s boat made it safely to Jakarta.

We eventually understood that everything we needed was paid for and that we would leave the next day on a large boat that could handle the waves. Good thing, because during the night, the wind worsened and blew rain under our door. How happy we were not to be sleeping under a picnic table!

But our troubles weren’t over yet. The next morning the wind still blew so hard, we were told the boat wouldn’t leave until the afternoon.

Despite misgivings about the wind, my husband and I were amazed how God was working out every detail. The previous night Berrie brought us dinner. We went from not having enough money to leave the island to having plenty of cash.

Our room and boat fares were paid for  — even Berrie’s services. We didn’t have to worry about a thing. Nonetheless, I still worried about the wind. It threatened to blow forever.

Shortly before we were scheduled to leave, the wind suddenly stopped, and the ocean became completely calm. Interestingly, the large boat we had been promised never materialized. We left on the same kind of vessel we had earlier rejected, but now it gave us a fast, smooth trip to Jakarta.

God did exceedingly above what we could ask or think. I left that little Indonesian island completely awed at His miraculous provision. A seemingly impossible situation had changed in a heartbeat.

I’ve changed too. Whenever I find myself beginning to worry about things that look hopeless, I remind myself that God promises to take care of me. If He could get me off that island, He can work out any challenge.