Joni Topper has published articles in Christian Devotions and the Breakthrough Intercessor and wrote for Lamb’s Tale Ministry. She serves as worship leader alongside her pastor husband. Her albums can be found on Spotify, YouTube, Apple Music, Google Play, and many other music platforms. Joni lives in Johnson City, TX. Read her blogs here: www.morningloryministry.com. 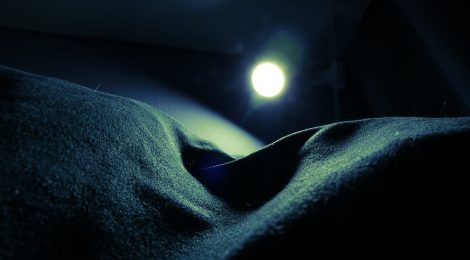 A hero of the faith helps a teen conquer fear.

nowwhat / December 1, 2022 / Comments Off on The Faith Test / Mental and Emotional Health

Shivering and half awake, I pulled the covers up around my neck. The dark of my cozy bedroom told me a new day had not yet dawned. The strange dream that rattled me from a sound sleep permeated all my senses.

In it, I laid an ice egg. Lying there, I cringed, wondering why I would dream such a strange thing. The day before included no barnyard visits, nothing memorable that might have prompted such a thought. Yet the dream felt so real.

The cold of the egg almost burned my skin, and in such a private place. I winced at the thought, squeezing my eyes shut even tighter.

My sister’s bedroom shared a wall with mine. We always left the door open that separated the rooms.

Lying there, I heard Becky stir and mumble something. Then she began to scream —a  blood-curdling, top-of-your-lungs, terrified scream that I had never heard before. Her unbridled fear almost shook the walls and felt as if it would never end.

Sitting up to see what frightened her, I watched a man run from her room, through mine, and on out of the house. He’d been sitting beside her bed touching her with his cold hands. She awakened to see him hovering there.

I froze, piecing the scene together. I realized the man had been touching me as well — where an egg would have come from. That was the reason for the strange dream.

I felt violated, as though my purity had been stolen by a stranger. No man had ever touched me in an intimate way before.

We’d always felt safe in our community of about 80,000 people. We never locked our house. But I realized after this incident that Dad took safety precautions I’d never noticed.

Thinking about crime prevention made as much sense to me as pondering Smokey the Bear ads. The bear may have been somber and catchy, but we didn’t live in a forest. We lived in the dessert. We didn’t worry about forest fires — or crime. My dad wore the title of Chief of the Reserve Deputy Sheriffs in the county. I always felt safe.

In the days that followed, fear gripped me, and despair ate at my dad. Providing a safe environment for his family held paramount importance to him. I’d never seen him anything less than capable.

Now he felt helpless, discovering a vulnerability in himself he’d not ever realized as a parent. I was saddened at his self-torment. I also did not want to be permanently scared from this incident myself.

A palpable unrest settled in our home where safety had never even been a question before. My ability to fall asleep disappeared.

When this frightening experience occurred, I was 16 — just a few years after I began my Christian walk at age seven. Now I decided that if my faith made no difference in life, it did not qualify as faith at all. My decision to follow Christ would only be wimpy and empty if I would not let Him help me chart deep water.

By this time, I understood that God wanted my relationship with Him to grow, not remain in a compartment that opened at church and during holidays. Anything that’s alive is in a constant state of change. I wanted my faith to be alive, but I also understood it would require effort on my part.

I reached a tipping point in my life. I refused to live in fear, but my own efforts to calm myself failed.

Deciding only God could help me, I propped up with my Bible in bed one night. I knew the Word of God should offer answers to my problems, but I didn’t know where to look. “God, I don’t know what to do,” I confessed.

I’d heard people say they found answers to their problems in the Bible, but it seemed like such a daunting task to find some story that fit my situation.

Opening my Bible, I began reading about David hiding from Saul and his army. I understood the despair David must have felt. His safety hung in the balance for a long time. He proved his loyalty to King Saul and still found himself treated like an enemy.

How terrifying it would have been for David to know that three thousand of the king’s men were hunting him down to kill him.

Frustrated because David feared for his safety just as I did, I decided this might not be the calming passage to ease my pain.

I turned to Psalms and began reading. I knew David wrote many of the psalms. Even so, it took me by surprise when I read his words: “I will both lie down in peace, and sleep; for You alone, O Lord, make me dwell in safety” (Psalm 4:8, NKJV).

Those words popped off the page, and I shook my head in wonder. Of all the words in that huge Book, I’d found a story of someone else living in fear — a fear substantiated by his experiences. Yet David said he knew God could and would protect him.

That psalm branded my heart and planted a whole new understanding of God’s goodness deep within my spirit. If David could lie down and sleep while Saul and his army sought to kill him, I could sleep too.

David decided to trust God. I would decide too. I could entrust my peace of mind to God as well.

No one saw me make this decision. I do not remember telling anyone except my sister. From the moment I decided to let God be my comfort, I learned firsthand that His trustworthiness is authentic.

A place of rest

I’ve also learned that life bombards us all with situations we must recover from. Often, they happen to us, rather than because of us. I see now that how we deal with those circumstances determines whether or not we rest, building our faith.

From that moment on, bedtime became a time of renewal, not a time of terror. Thanks to my faith standing the test, I could rest in peace and safety regardless of my circumstances — just as David did.