Rebecca LeRud has been published in LIVE, Pentecostal Evangel, Evangel, and American Horizon. She lives in Lebanon, OR. 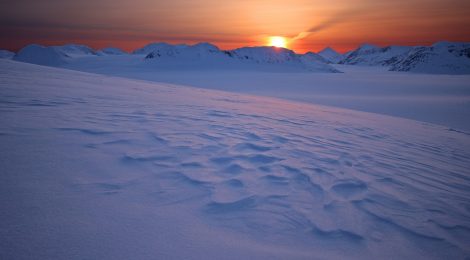 The Gift of Presence

A personal touch from a personal God.

nowwhat / September 1, 2017 / Comments Off on The Gift of Presence / Death and Grief

Movement at the classroom door caught my attention. Why would David, the pastor from Barrow, be here in our village? A plane had to bring him here on this stormy February morning.

Pastor David motioned me to come closer. Then I noticed my husband, Stan, with tears streaming down his cheeks. Oh, Father in heaven. What’s happened?

Six months earlier, Stan and I moved from Oregon to this tiny spot on the Alaskan tundra. My emotions had run the gamut, from anticipation, excitement, and anxiety to dread. Concern for Stan’s health since his recent stroke, beginning a new job in a new culture at almost 50, reluctance to leave our family — all these took a toll.

Although we planned to return home for the holidays, four months seemed an interminable time to be away. Our son and his wife were expecting twins — our first grandchildren. How could I bear to move more than 2,000 miles away during this exciting time in Tim and Denise’s lives? I would miss out on baby showers, preparations for the nursery, and most of all, cuddling newborns and savoring the miracle of birth.

Friends asked us, “Why Alaska?”

Our son expressed it well: “My mom and dad are more adventurous than most parents.”

Yet it wasn’t just an adventure. We felt the Lord was leading us into a new area of ministry. In addition to teaching in the Eskimo school, we were living our dream of missionary service. With the blessing of the village elders, we started a Bible school and church services.

Daylight hours shortened as October arrived. We had seen our first snow weeks before. The last week in October, guests came — a missionary couple who held services in the school, the only meeting place in the village.

Sister Rogers and I decided to make popcorn balls for a party the students were having. As we shaped sticky popcorn on the evening of October 30, an urgent message from the village store interrupted us. Our son had called to the only phone in the village to tell us we were the grandparents of twin boys, Justin and Joshua.

Shocked, we could hardly grasp the exciting news. The twins weren’t due until mid-December. Although delighted with their births, we were deeply concerned that they were seven weeks premature.

Now, on this stormy February morning, before the blizzard began in earnest, God sent Pastor David with tragic news: Baby Joshua was dead.

“I had to come in person,” David said. “I couldn’t send that message through the village phone or over the Tundra Times.” With only a single phone for the entire village, we relied on the Times for news. Daily radio broadcasts aired messages across Alaska’s North Slope. Those offered little privacy, and messages ranged from humorous or innocuous to urgent or deeply personal.

This time, the message was for us.

I hurried to the sanctuary of our home, away from curious students. Heartbroken, I could only pace the floor and cry out to God. I grieved for my son. He discovered Joshua’s lifeless body in the crib next to his twin. Joshua was the smaller of the baby boys. Though he was frail, we had no reason to expect his sudden death.

I ached to hold my son, but no planes would fly for several days in an increasingly wicked storm. There was no way we could leave to be with our kids in their grief. The pilot said he had to return to Barrow immediately. The storm would shut down air traffic for at least three days.

I stared out at the worsening blizzard. Through snow slanting sideways by gusty winds, I glimpsed a figure approaching our door. It looked to be an elderly woman. She pulled the hood of her fur-lined parka close against her cheeks. Her mukluks scarcely left footprints in the rapidly falling snow.

As the shriveled Eskimo woman labored up our front steps, my mind filled with questions. What does she want? How will we communicate? What will I say to her? Her native Inupiat language was far too difficult for me. Few outsiders could speak it. Like most elders in the village, her English was virtually nonexistent.

I opened the door.

That was all I needed to hear. Grief is a common language, and the healing power of prayer is universal. Even when we don’t understand the words, God does and He answers.

The old woman sat with me the entire day, long and painful though it was. God had sent a reminder of His own presence. I knew He was with me, but having a physical presence to share my sorrow brought sweet comfort.

Despite the reality of God’s help, my grieving process took time and was intensified by separation from family and all that was familiar. I longed to be with Tim and Denise during their adjustment.

Loneliness threatened my emotional and spiritual well-being as I struggled with a loss that seemed unnecessary. Friends and family encouraged us with frequent cards, letters, and assurances of prayer.

God brought His own precious comfort. After another ten years in the Arctic, we returned to our Oregon home and family.

Good out of grief

Looking back, I see God’s hand in the lives of Tim and Denise. They lavished love on Justin, while grieving the loss of his twin. A year later, God sent a delightful, precocious little girl to brighten their family and renew their joy.

They channeled their loss into a grief recovery ministry as a part of Tim’s calling as a pastor. God used them especially in reaching out to parents who had lost a child to SIDS (Sudden Infant Death Syndrome). This young couple discovered the truth of 2 Corinthians 1:3, 4:

Blessed be the God and Father of our Lord Jesus Christ, the Father of mercies and God of all comfort, who comforts us in all our tribulation, that we may be able to comfort those who are in any trouble, with the comfort with which we ourselves are comforted by God (NKJV).

God’s hand was in my life as well. As a parent, I grew in my faith as I saw God at work in my son and his family. And I continued to be amazed at His ways of being with me in every circumstance. Truly, I am never alone.