Donna L. Morse is a retired nurse and nursing instructor. Enjoyment of books and reading sparked a desire to write following her retirement. Her writing has appeared in LIVE, Penned From the Heart, Journeys in Prayer, American Journal of Nursing, and other publications. Donna lives in Olympia, WA. Visit her blog at donna770.blogspot.com/.

Browse: Home   /   The Most Challenging Race 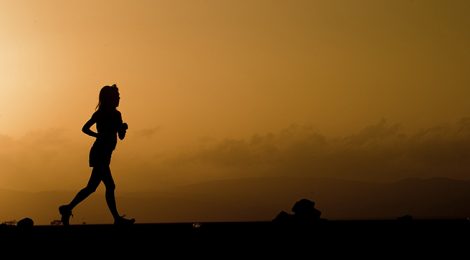 The Most Challenging Race

A runner learns to trust God when the bottom falls out of her world.

by Christina Rose as told to Donna L. Morse

nowwhat / July 29, 2016 / Comments Off on The Most Challenging Race / Physical Health

I felt the pull, then the pain. It immediately slowed my pace. I’d never had an injury in all my high school years of cross-country running.

Far from home in new surroundings, I’d sensed the excitement of new experiences. A freshman and one of two top runners on my university cross-county team, I felt like a fledgling bird who had taken off on her first flight. So far, I’d finished three competitions — a great start to the season — and had been well trained in my sport. How could anything go wrong?

Maybe it will go away, I thought as I tried to complete the speed workout. But the pain only increased.

With sweaty palms and a slight limp, I approached my coach to tell him what happened. The university had granted me a scholarship for running, creating pressure to perform.

It hadn’t taken long to see that university sports were nothing like high school competitions, where winning was great but team spirit and besting ourselves had been the focus. University sports are all about winning and money.

With an audible sigh, my coach ordered me to therapy. The injury was identified as a pulled IT (iliotibial) band, the tendon that extends from the hip down to the side of the knee. It can cause severe pain at either end when strained. My IT pull was in my hip.

Another teammate had injured her ankle. Team camaraderie is encouraging, so we worked together on recovery. Soon our efforts brought us back to our team, good as new.

I love running, and the trails around the university provided a place of solace. As our team took off on a practice run, joy coursed through my body. The cool autumn breeze blew through my hair and filled my lungs. My feet pounded the dirt path in the rhythm of the run.

Then I felt it again — the pull, the pain — this time with even more intensity. I hadn’t even completed one full run with my team. I tried to ignore the annoyance in my coach’s tone as he ordered me back to therapy.

This time I was alone in my recovery. The full range of treatment included massage, heat, ice, electrical impulse, and hours of pool exercises. Recuperation from an injury is rigorous and more time-consuming than practice for cross-country meets.

Discouragement intensified as my coach gave no direction or encouragement during my therapy, nor did he stop by to ask how I was doing. Even my teammates grew distant, as if they didn’t believe I was really suffering an injury. Conversations with them became uneasy, clipped. Often I was excluded all together.

I cried out to God. Dear Lord, can’t they see how hard I’m working to overcome this problem? Yet the cross-country season ended with me still in rehab therapy.

Journaling became my way of venting frustration. In written prayers, I questioned God, called out for healing, told Him of my angst and fears.

I tried to focus on mending my body. Yet the longer it took, the more my confidence slipped. My greatest desire was to be part of the team, to be liked and appreciated as a working member. I wanted my family to be proud of me, too.

Yet all this seemed to be sliding away. Even class work became more of a struggle.

As the next cross-country season rolled around, I began to dread practice. My injury quickly resurfaced, then seemed to heal, only to hit again. The same scenario took me off the trails and back to therapy.

My spirit and my passion for running began to lag. Not only did my focus suffer, but my smile disappeared as well. My teammates withdrew from me as though I had a disease they might catch.

Dear Lord, I wrote, right now I feel worthless. I don’t understand what I’m doing wrong. My coach, my team — no one seems to understand or care. My world is falling apart. I withdrew into myself.

As my sophomore season ended, without warning and in front of the entire team, my coach informed me that I would lose my scholarship.

His cold dismissal, followed by snickers from my teammates, stung my ears. I walked off the field stifling sobs but unable to stop the tears coursing down my cheeks.

Brokenhearted, I called my parents. As I wept in despair, my story poured out in a frustrated, ugly mess of emotion. They listened, empathized, and pointed out that options would need consideration.

Losing my scholarship was degrading, but it also put me in a precarious position financially. In those moments, the pain of that reality colored everything in my world dark and hopeless.

As the days went by, I began to accept my situation. In my journal my heart begged, Dear Lord, give me purpose again. If I can’t run, keep me busy and focused on something else. Take the worthless feelings away.

Though still uncertain, I prayed through my options as my parents had counseled. This out-of-state university had the special program in health science I wanted. Could I even hope to remain?

The expense was great. I could leave the university and attend an in-state school with a less meaningful program. Or I could stay and spend the next year gaining state residency. Doing this would make my education cheaper by several thousand dollars.

Bone weary from all the effort, I asked God for clear direction.

Finally, I decided to stay at the university and gain state residency. This meant spending the next year working and saving for my education. I would graduate later than planned, but I could still get the education I’d hoped for.

Stepping out on my new path became an adventure. As I moved one step at a time, past difficulties began to fade. I found a good job that allowed me to take a couple of classes while applying for state residency.

Next I discovered that a teaching major was a better fit for me than health science alone. I enjoyed children and could use health science and my interest in sports to teach kids of all ages.

One by one, God answered my prayers. Without the pressure of practice, competitions, or therapy, my injury healed and my classes became enjoyable. I felt excitement in the renewed direction of my major.

I even joined the Health-fitness Club on campus that focused on my interests. I tried a variety of sports in addition to running. New hope dissipated my gloominess. As my confidence blossomed, my smile returned.

One thing still troubled me: the strained relationships with my former teammates. They had not understood or sympathized with my situation, and I didn’t know how to interact as we passed each other in the hallways and on campus grounds.

Dear Lord, I don’t know how to fix this problem, I told God. Yet my life continued to move forward in positive directions.

Unexpectedly, my Health-fitness Club members elected me president. In this capacity, directing the annual Youth Track Meet became my responsibility. Helping the kids prepare for their particular sport in track and field, then leading the competition at the final meet, proved great fun.

The final competition required participation of many of the university’s athletes in related sports, so my old teammates came to help. They were surprised to find me in charge. Because I was directing the meets, I had to tell them what to do.

My heart began to race as fear washed over me. How will they respond to taking orders from me? They see me in such a negative light. Help me, Lord, I prayed.

Despite the awkwardness, I could not let my anxious feelings take control. So I stood up and did the directing and assigning I needed to do. As I went forward with my duties that day, I forgot all about my anxiety and had fun interacting with the kids.

To my amazement, when the meet ended, several of my old cross-country teammates came over to speak with me. “It’s great to see you! How are you doing? So glad you’re feeling better.”

Their efforts allowed us to interact respectfully as fellow students again. God had beautifully answered my last concern in a way I never imagined.

When my problems began, many of my prayers were written repeatedly out of frustration with God, wondering why I was afflicted, and with a how-could-this-happen-to-me attitude. Impatient, I wanted my situation to change immediately.

Yet as I lived each day, the realization slowly trickled over me that His purpose was higher than mine. What at first seemed like loss was actually gain. Deciding to pray instead of worry (Philippians 4:6, 7), I learned to trust the faithful leading of my great and mighty God.