Douglas A. Maxson has published poetry and short memoirs in The Good Old Days, Reminisce, a short story collection, and an online magazine. Retired and a member of a local Christian writers critique group, he is working on two novels. Douglas lives in Cedar Springs, MI. 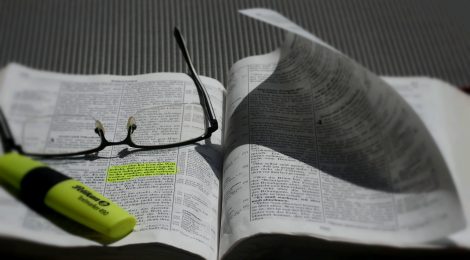 The reward of persevering in prayer.

by Douglas A. Maxson

The devil had a head start, with sixty years of my father’s life under his belt. There was no reason to think Dad would make any lifestyle changes at that age.

During my growing-up years, my mother kept many secrets about my dad from me. Some of his weekend trips to the red district of Detroit were a few of his skeletons in the closet. These troubled my mother, but despite them, she saw that Dad spent quality time with me.

This was my mother’s third marriage, despite the fact that she didn’t believe in divorce. She didn’t want to raise me without a father — even with his negative habits.

My mother’s mother was a conservative Christian with strict values. She had much influence on my mother’s previous two marriages and on how she raised me.

Because of this, Mother determined not to rear me the same way she was raised. Allowing me to make a lot of my own decisions, along with some Christian training, set the stage for me to influence my father in making a decision for Christ late in his life.

Before I became a Christian, I had a two-year battle with anxiety, resulting in extreme bursts of panic attacks. This influenced my desperate plea to turn to God for relief and, eventually, a conversion saturated in prayer.

My communication with God started as an antidote against the fear of returning panic attacks. Later, with prayer as a commanding force, God set in motion a plan that became one of the greatest spiritual transformations I ever witnessed.

My first step in this journey was attending a small Christian college on the west side of Michigan — my home for the next four years. I spent the first two as a resident on campus.

After lunch one day, I returned to my dorm room to study. A silence blocked out every thought, and my studying halted. The white-painted block walls surrounding me could not hush the voice that would take center stage. The voice was subtle, but direct and instructive.

There was no question it was God’s, the same voice that invited me to become one of His children through His saving grace. He called me to specifically pray for my father. Knowing his dark past and present, God burdened my heart to pray every Tuesday and Thursday for my father’s salvation.

My dorm room was vacant on those days. It became the prayer chapel giving me access to the throne of God. Other classmates knew where I was each week and admired my determination to pray earnestly. The more I prayed, the more I learned how God responded through Scripture and meditation.

After many weeks and months of this burden for my father to know Jesus as his personal Savior, I asked myself, Is God listening? It seems to be taking longer than I expected.

That’s when God introduced the next phase. Aware of my concern for my father, one of my college friends gave me a tract explaining the plan of salvation in layman’s terms. “Give this to your dad,” he told me. “It helped my dad.”

I thanked him but thought to myself, Why? He doesn’t read well.

While visiting my folks one weekend, I handed the tract to my father and urged him to read it.

After months of praying, my desires were about to come to fruition. Dad later told me that he would park downtown, reach into the glove box of his car, and pull out that ten-cent tract. He read it so often that the pages were barely connected. Dad underlined many passages of interest, some with a notation: This is good.

Was this the time for me to have a serious conversation about what my dad was reading? Did he understand the message of sin, forgiveness, and the plan of salvation?

As I continued to pray, God continued to work behind the scenes. Each time my dad read the words from that tract, God’s presence communicated to him in ways he could understand. My father’s demeanor went from fear and confusion to comfort and acceptance. Something had changed.

Transformation was written all over Dad’s face. There was no need to question what he was experiencing. Dad had met the Master! He related to me how God had graciously forgiven him of his sins. I could see the remnant of sixty years of sorrow washed by the blood of Jesus.

Dad shared in limited detail some of the sinful practices that Satan used to enslave him. Because they were so shameful and embarrassing, he couldn’t share them with me, and I didn’t press the matter. He didn’t want to relive the shame and guilt his sin brought upon him and his family.

The next step of faith required me to obey the voice of God again: “Get your father his own Bible.”

“Why?” I asked God. “His reading ability is limited by his lack of education. Will he be able to comprehend such a masterful piece of literature?”

It appeared I had forgotten whom I was speaking to.

I purchased a Bible with large print so my father could see the words easier. He often went to a special room upstairs in his home to play his harmonica, but something else happened in that room. Those fingers that gripped and warmed his harmonica found a new item new to warm: the Bible.

I’ll never forget what Dad said to me sometime later: “God is helping me to read better.” The Bible was becoming not only his textbook for Christian living but his textbook for learning new words. Dad’s Bible had scripture after scripture underlined as if he were studying for a test.

Being a Christian, my mother never complained about my dad not going to church. She didn’t want to be like her mother and come on too strong, so her approach was a calm invitation to all unchurched family members, including my dad.

Before his conversion, Dad sat in his car in the church parking lot waiting for us to get out of the service. Now he sat next to my mother in the pew. That seating arrangement continued for the next thirty years. They both have passed on and have traded those earthly seats for heavenly rest.

If my freshman year at college was for the one purpose of seeing my father accept the Lord, it was worth every tear shed.

As a reminder of my dad’s conversion, I take out his well-used Bible and review all the underlined scriptures. Some have that little caption written above: This is good.

I have to agree.