Virginia A. Johnson has published 200 articles in newspapers, periodicals, and tabloids and has self-published a book, A Greenhorn Gal: Life in Eastern Montana. She and her husband live in Sublimity, OR. 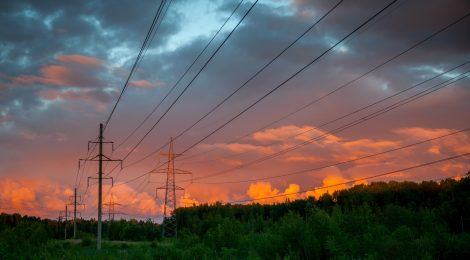 To the Other Side

An everyday reminder of triumph over adversity.

by Virginia A. Johnson

We watched as the squirrel began his journey on the high electric wire. Our furry neighbor in Fallon, Montana, scurried several inches, teeter-totter fashion.

But then a gust of hot September wind slapped him. He managed to stay on that wire, but only after some spectacular moves, and done with a bushy tail flopping in all directions. He’d pause, and then begin the process again.

The squirrel’s goal was to reach the other end of the wire and the safety of a giant Chinese elm. His survival techniques amused us, but his precarious journey reminded us of a previous September in Fallon, when a medical emergency engulfed my husband, Wayne, and me.

Within hours we found ourselves perched atop a figurative high, slender wire as the strong winds and the searing heat of adversity threatened our faith in the Lord. Like the squirrel, we were desperate to make it to the other side of this crisis. With each step of our journey, we had to trust in the Lord’s guidance and wisdom while He strengthened our resolve to stand upon the truth of His Word:

Trust in the Lord with all your heart, and lean not on your own understanding; in all your ways acknowledge Him, and He shall direct your paths.

Fallon served as our second home two months of each year. We’d been in eastern Montana several days when Wayne’s right eye started bothering him. Neither of us thought it serious. Then Sunday evening he lost all vision in that eye.

On Monday afternoon, Wayne scheduled an appointment with an optometrist in Glendive and drove himself to the appointment. He called me on his cell afterward.

My husband’s voice, heavy with anxiety, told me the bad news: The retina had almost completely torn away from the eye. He would be permanently blind in that eye if he did not have surgery, and soon. In addition, the optometrist made an appointment with a retinal specialist in Bismarck, North Dakota, for late afternoon on Tuesday.

We threw clothes into suitcases, and, with sunset at our backs and growing darkness ahead, began the more than 250-mile trip east. As I drove to Bismarck, Wayne called our children. Though we prayed, both of us struggled to keep our thoughts steadfast on the Lord.

Night had settled in as I drove across the Missouri River and into the city. I located our motel, but due to an upcoming medical conference, we could rent our room for only two nights.

The specialist’s office had scheduled the operation for Wednesday. Where would we stay afterward? Available motel rooms in Bismarck would be scarce.

After we met with the specialist Tuesday afternoon, the decision was made to do surgery as soon as possible — later that night at the hospital.

I rejoiced at this good news, but I still had to deal with realities. We were in an unfamiliar city. The surgery would be performed in a large hospital, one alien to us. And we were alone.

After my husband’s four-hour surgery, the specialist decided he must stay overnight so they could keep watch over the delicate condition of his eye. I went to the motel and tried to sleep.

The doctor released Wayne on Wednesday morning with directions, which I had to oversee: Stay awake for the next 72 hours, apply a set of eye drops on a rigid schedule, and rotate his head every half hour. Wayne’s next appointment would be in seven days.

Seven days? Even during the brief trip back to the motel, the slightest road bump or pothole caused excruciating pain in Wayne’s eye. It was unthinkable to drive home to Fallon.

But where could we stay in Bismarck? Our path ahead seemed obscure and frightening.

When I drove us back to the motel to check out, the desk clerk had a surprise waiting for us. “The couple that booked your room are not coming after all,” he said.

The clerk couldn’t help but notice the large, bulging bandage over Wayne’s left eye. “It will be available for the next several nights if you want. I can charge you half the regular price during your entire stay,” he added. “This rate is reserved for out-of-town guests in Bismarck for medical needs.”

We settled into our temporary home while I kept vigil over the care of Wayne’s eye. By this time, we knew many people were interceding to the Lord for us. What a comfort!

Then another blast of adversity hit.

It snowed in Bismarck.

In our hurry, we’d packed clothes suitable only for hot weather. Two angels of mercy, Don and Carleen, went into our Fallon home and scavenged what cold weather clothing they could find.

Then, despite the snow, this couple drove to Bismarck. How grateful we felt for their faithfulness to meet our needs and for their sacrificial kindness.

At the check-up a week later, we were told Wayne’s eye had begun to heal, so I drove us back to Fallon. Two weeks later, the specialist declared Wayne’s eye had healed well enough for us to travel back to Oregon.

His office arranged for a retinal specialist in Portland to take over care for Wayne’s eye.

Happy news, but it presented problem for me.

Each year we made two 2400-mile round trips from western Oregon to Fallon, and Wayne drove most of the time. In fact, I seldom drove our car. I felt not only inadequate to this new challenge but also anxious at the thought of driving all those miles home with a man in constant pain.

We prayed about my sense of inadequacy and fears. With a determination that surprised me, I packed our car, got Wayne settled inside it, locked the house, and slid behind the steering wheel.

“It’s my job to pray for you and to get us home,” I told Wayne. “Your job is to take care of your eye and pray for me.”

A few miles down the road, I knew we would make it. Not by our strength alone but accompanied by the wisdom, strength, and comfort of God’s Spirit.

We arrived home, but our journey to the other side proved still beyond reach. Wayne’s loss of vision, plus cataract surgery on that eye, made life a challenge for him.

Then another blast of hot wind threatened to fling us off that high, thin wire: The retina in Wayne’s other eye tore. Each time our faith started to teeter-totter, we stood upon the authority of God’s Word:

Do not be anxious about anything, but in every situation, by prayer and petition, with thanksgiving, present your requests to God. And the peace of God, which transcends all understanding, will guard your hearts and your minds in Christ Jesus.

It took two long, faith-testing years to reach the other side of this adversity. Through it all, steadfast people prayed for us and cheered us onward.

Their faithfulness to uphold us in prayer and model the Lord’s love were two wonderful gifts — ones we’ve tried to pass on to others when they have walked that high, narrow wire.

Now on this September day years later, the Lord used a little squirrel to remind us how He’d faithfully brought us to the other side of our test-filled journey.

We watched that stubborn rodent, foot by tiny foot, as he traveled his precarious path and how he stayed focused, despite the relentless heat and wind. Determined, his feet kept going until he reached the other end of the wire to the safety of the old Chinese elm.

As the squirrel leaped onto one of its large branches, we cheered. We had reached safety as well.