Joyann Dwire has written articles for Pennyslvania Magazine, Purpose, Seek, The Quiet Hour, Cup of Comfort for Women, and other publications. Her children’s picture book What Kind of Cow Are You? was published in 2006. She also co-authored the non-fiction book Miracle at Dormel Farms. Joyann lives in Toccoa, GA. 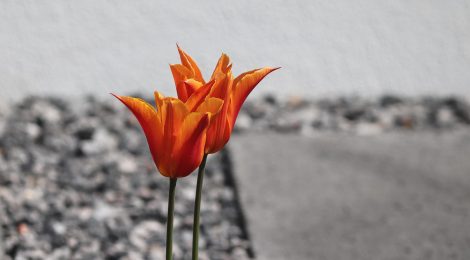 Two is the Loneliest Number

When we feel the most alone, God stands with us.

nowwhat / September 1, 2022 / Comments Off on Two is the Loneliest Number / Caregiving, Home and Family

Mom’s stroke caught us all by surprise.

She’d been declining for many months, but we weren’t expecting this sudden debilitation. Neither did we foresee the difficulty of the next eleven months when we decided to care for her at home.

Or maybe I should say I didn’t foresee it. I lived with Mom, so I became the primary caregiver.

My journey as a caregiver began in late 2001 when Mom had her first hip replacement. It was a simple matter in those days. After rehab, Mom was back to her old self — in the kitchen cooking our meals and cleaning the house as she could.

In the years leading up to her stroke, however, Mom went through two more hip surgeries and the addition of a pacemaker. She also suffered with shoulder rotator cuffs that were too damaged to be repaired at her age. As the years went on, the strong mother I had known, who could work circles around my dad, became more and more of an invalid.

Then came the stroke.

As a family, we agreed we would care for Mom at home. My niece drew up a schedule for herself, her sister, and her mom to help me, and home health was scheduled.

I would have lots of help. How hard could it be? The reality hit me once Mom came home from the hospital and settled in on the sofa.

At that moment, I was at a loss. What do I do now?

“Do you want something to drink?” I finally thought to ask Mom.

She didn’t look at me. Couldn’t. The stroke had turned her head and focus to her right. If you weren’t on that side, you didn’t exist. Even if you were on that side, there was no eye contact. No smile of thanks.

No one is at their best when they’re in the hospital, but in the familiar surroundings of our home I expected . . .

What did I expect? That she would miraculously go back to her old self? I certainly hadn’t expected to be left alone with a total stranger.

“I want my mom back,” I said. Not out loud. And not for the last time during the ordeal.

The schedule was simple enough. My nieces and sister-in-law took turns coming in to help me lift mom in and out of bed, in and out of the wheelchair and onto the bedside toilet.

Four times a day someone came in. Their help was most welcome, but they had their own families. Their own lives. They came in, fulfilled their responsibilities, and went home.

Meanwhile I struggled to deal with what was, in essence, the loss of my mom. No one seemed to get that. Every day I was left alone to deal with my emotions.

I don’t deal well with my emotions. Never have.

Mom loved people, especially children, and her big, toothless smile never failed to draw people in. “Your mom’s so sweet,” people said to me. Or “Your mom’s so cute.” It must have been the lack of teeth. Somehow it made her smile so much broader. Like she was smiling with her whole face.

And then there was her laughter. It was contagious. I loved to get her going on one of her giggle fits. “Laying eggs,” she called it.

Mom didn’t laugh after her stroke. She didn’t show any emotion. Her emotions had been damaged by the stroke. Were they still in there? We didn’t know. She didn’t talk much anymore.

Meals were the most difficult times of the day. The first bite of the first meal after she came home revealed the torture meals were about to be.

But the chewing went on. Meals lasted a minimum of half an hour. Often longer. In my mind I was wailing, I can’t do this, Lord.

His words came back in answer: “Yes, you can. With My strength.”

My protests were a daily ritual, and often I couldn’t find His strength. I knew it was there, but it seemed elusive, especially as meals became more trying. My patience failed, and stress took over.

It was one of the few times Mom spoke, and her voice was thicker and deeper than I remembered it.

Some food textures were uncomfortable for her, but there was no way to know what foods she wouldn’t swallow until they were in her mouth. One mouthful of corn alone took twenty minutes.

When the torture finally ended, I fixed my own plate and sat down at the table to eat.

The stress was weighing on me, affecting my health. I sank in a deep depression. I was losing my temper more often. And since it was an emotional issue, I found it difficult to talk about.

I identified with David’s cry in Psalm 55:6: “Oh, that I had wings like a dove! I would fly away and be at rest.” Rest. That’s what I wanted more than anything.

I never seemed to make it to verse 22: “Cast your burden on the Lord, and He shall sustain you; He shall never permit the righteous be moved.”

Even spending time with my church family didn’t help. I knew they cared. In fact, when my entire family left on their vacation, I turned to people from church for help. For the most part, though, they weren’t sure what to do or say.

“We’re praying for you.”

And they were gone.

I began to realize a greeting like “How are you?” served as a substitute for “Hello.” They were obligated to ask, but the answer was more than they wanted to hear. Eventually, I gave up and just replied, “She’s the same.”

I wanted someone to say, “Listen, I’ll come tomorrow night and feed your mom. You go out and have a nice meal at a restaurant.”

When I asked someone to help me, they were always there. But I had to ask for help; no one volunteered. The subject seemed to make them uncomfortable.

Occasionally the well-meaning person told me, “Just get out of the house for a few hours. That’s what I do when the kids are getting on my nerves. Go to lunch. Go shopping. It works for me.”

I nodded my head, but I was thinking Of course it works for you. You chose to have your kids. I didn’t choose for my mom to be in this condition.

You don’t come home to someone who is dying.

It’s not the same.

One day the home health nurse recommended we switch Mom to hospice. I didn’t want to hear it.

I didn’t realize that I was already grieving. The mother I knew died the day she had her stroke.

After a few weeks, I relented and allowed hospice to come in. It was the best decision I made during that time.

The caregiver lives in a dichotomy. I wanted to care for mom at home. Even now, knowing how hard it was, I would do it again. And yet, somewhere in the back of my mind was a desire to be free. I wanted it all to end.

So when death came, I felt relief. Finally I had a reason for the grief I’d been feeling all those months.

I didn’t realize that when I returned home after the funeral, the stress would remain.

I was still deep in grief.

I was still in deep depression.

Every day when I walked in the door, the house was empty.

The hospice people no longer came, and family no longer showed up four times a day to help.

Day at a time

The eleven months of home care for my mother were emotionally devastating. But through it all — through my despair, frustration, and insistence that I couldn’t do this — God’s grace was with me. I got through each day, one day at a time.

Doing this and learning to rely on God’s strength, rather than my own, is a process that continues.

I am learning to cast my burdens on the Lord.

Scripture quotations are taken from the New King James Version.

How do you help a caregiver? Find out here:

Support for the Caregiver