Christine A. Holliday is a high school Spanish teacher and tutor at an all-girls academy. She does freelance writing for magazines and newspapers, including Toledo Parent News, Mature Living, Healthy Living News, and Liguorian Magazine. One of her essays is included in the Chicken Soup for the Soul book The Power of Gratitude. Christine is married, the mother of two, stepmother of one, and grandmother of three. She lives in Toledo, OH. 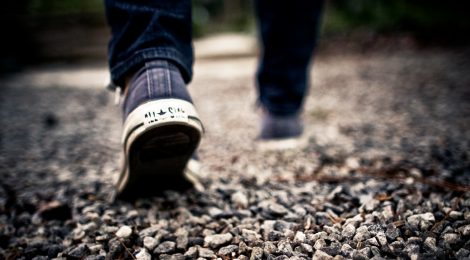 Waiting for My Prodigal Son

The blessing of a baby turns into a nightmare.

by Christine A. Holliday

“You are DEAD to me, mom. I never want to see you again.”

That text message came from my older son. Ben had chosen to spend the holiday season away from his wife and son, parents, and extended family, “crashing” instead with his friends from the street. He was angry that I had expressed my disappointment in his choices. He sent the message twice, maybe because I didn’t respond, maybe because he wanted to make certain I understood.

I understood — only too well. In his 24 years, I had received plenty of nasty phone calls, notes, and e-mails. I had been scolded and berated and threatened and ignored. All from the little boy I had hoped for — the adopted child who had seemed to be an answer to our prayers.

I wondered why in the world God had sent us such a “difficult” child. Why didn’t God see that I had done my best to be the good mom this special gift of a boy deserved? What if I wasn’t good enough? Shouldn’t God have known that?

That holiday message came six months after Ben had returned from the Army on what was supposed to have been a four-week leave. He went AWOL at the end of that leave, told his wife he wanted a divorce, and moved in with another woman. He was arrested for drug and gun charges in the following months, and we exhausted efforts to get relief for his family from the Army and criminal justice system. We found ourselves in a sadly familiar spot: wondering what to do about Ben.

We had prayed about Ben long before we met him. Not conceiving a child of our own for the first two years of marriage, we began to consider adoption. We did fertility testing, took parenting classes, and cooperated with home studies, while continuing to pray. My husband, Doc, was nearly fifty years old, so our prayers held an urgency. Please, God, Doc already has a nearly grown daughter. We’re both getting older. Please send us a child — or take the desire away!

We placed a “Family looking to adopt” advertisement in our church paper. Ben’s birthmother responded, and we brought three-day-old Ben home just a week after I learned that I was pregnant. Thank You, Jesus! My prayers have been answered. You heard us. You blessed us. You love us — doubly!

Our two boys, seven months apart, had typical early childhoods. Ben loved books and puzzles and building things. He was bolder than his brother, Nelson, but much more likely to be a follower — traits that led him into trouble even in grade school. I prayed a lot for his teachers. They were doing their best and hated to call me so often with reports of Ben’s misbehavior. Help me, God, to know how to respond to their concerns and to reach him.

Ben was suspended for fighting and stealing in fourth, seventh, and eighth grades, and was expelled from high school in ninth grade. He stole cars, destroyed school property, used drugs, and broke into our neighbor’s home. By age 17, he had seen nearly a dozen counselors, psychologists, and psychiatrists.

My prayers at this point were more desperate. I didn’t understand why God was testing us, and I hoped that some God-sent event would shake Ben. I blamed God for sending us such a difficult child, wondering what we had done to deserve so much grief and pain. How can I love a child who doesn’t seem to want to be loved?

I realized that I didn’t like my son very much and was tempted not to care how he lived his life, since he didn’t care. I also couldn’t understand how my husband seemed better able to handle this rejection and not give up his faith that God was in charge. I guess I was angry with him, too, because he couldn’t make things any better than I could.

We stopped trying to explain Ben’s absence from family functions and learned to lock all doors and windows at night, never knowing what the dark might bring. Nelson would push his dresser against his bedroom door at night to keep Ben out, fearing his brother would hurt him or us.

I too feared what Ben might do. Would he hurt our cat to cause me pain? Would he set the house on fire to make a statement? Would he hurt himself to teach me a lesson? As it turned out, I didn’t get much more sleep during Ben’s teen years than I had gotten during his infancy. Oh God, is this why You sent us this child? We aren’t strong enough or smart enough to know what to do. Help us, please!

Ben spent his eighteenth birthday in drug rehab, after several short stays in the city jail and the county corrections center. He returned home genuinely eager to make a fresh start, and talked about finishing high school, getting a job, and making amends to the family and friends he had hurt.

But living at home again put Ben too close to temptation, and he was back to his old ways within weeks. Moving out, he told us, “I like living on the street” and stayed out of touch for months at a time.

Through an e-mail Ben sent in early December, I learned that he had a pregnant girlfriend. He told me that I would never know the little boy she was expecting in February. “I HATE YOU MOM,” that message screamed. “You never loved me and I wish you had never adopted me.”

Ben couldn’t have said anything crueler. Surely he remembered the times we talked about how happy we were to adopt him. He must have recalled our stories of waiting for him to be born so we could start our family. With all the tears he had seen me cry, how could Ben have spit out such unkind, hurtful words?

Ben’s son was born in February. My husband and I were there, called to be moral support. That little boy seemed to force his daddy into a kind of adulthood.

Within six months Ben decided he needed to provide for the child and his mother. He enlisted in the Army and successfully completed basic training, marrying his girlfriend on a leave home. At the graduation ceremony, he proudly showed off his little boy to his buddies. Maybe now, I prayed, he is ready to be a man. Thank God!

Ben’s first assignment was a three-year tour of duty in Europe, with one of those years in Afghanistan. He seemed to thrive under the military’s strict rules.

Unfortunately, being away from home, Ben avoided the responsibilities of marriage and fatherhood. He didn’t send money home but bought luxury items for himself. He even bought himself a car, planning that it would be waiting for him when he came home on leave.

Sadly, Ben’s return to the States didn’t bring him home with any wisdom. He never lived with his wife and son again, never stayed at a job more than a few weeks, and never made a real effort to be part of our family. He kept company with known drug sellers and users, treated the women around him badly, and more or less abandoned his son.

Ben is currently serving a ten-year sentence in a state prison. While I am in touch with him via weekly phone calls, I wonder how we will ever reconcile with him. He has tested our trust so many times that I cannot imagine believing him again.

The animosity he demonstrates toward us frightens me. I admit it: My heart has been hardened toward him. I still love him, but I don’t like him much. My hope for a future nurturing relationship with my son wavers every day.

But God has not abandoned us. He has provided angels along the way to keep our faith strong.

Teachers from Ben’s preschool (who now teach his son) remind us of Proverbs 3:5: “Trust in the Lord with all your heart and lean not on your own understanding.” And they pray for us.

One of Ben’s probation officers insisted that we keep John 14:27 close to our hearts: “Do not let your hearts be troubled and do not be afraid.” He still calls us occasionally, encouraging us to maintain a strong faith life.

Friends at work and church have built us up by recalling Psalm 46:1: “God is our refuge and strength, an ever-present help in trouble.” They ask but don’t pry, and continue to keep us in their prayers.

Even Nelson is a reminder that we aren’t on this path alone. He has finished college and started a teaching career. He is much more sensitive to troubled students than he would otherwise be, because of his experience with his brother. “I had to learn it hands-on,” he told me, “or I wouldn’t have believed how much pain some kids carry around.”

Nelson has stepped in to be a strong father figure for his nephew, hoping that his brother will soon be in a position to be the man in little Ben’s life.

Though we don’t know what the future will bring, we are guided by the words of the psalmist: “Wait on the Lord: be of good courage, and he shall strengthen thine heart: wait, I say, on the Lord” (27:14, KJV).

We are waiting — with hope for the return of our son and with gratitude for the gift of little Ben and the joy his life brings us. Thank You, God, for listening.

Scripture quotations are from the New International Version, except where noted.