Manndi DeBoef works full time at the UMKC School of Pharmacy. She loves to write and blogs about her daily adventures as a single mom, her two sons, and dating after divorce. She has also written on the loss of a loved one and suicide awareness. Manndi has been published in The Syndrome, Answers for Me, Her View From Home, and Newsbreak. She lives in Springfield, MO. Find her on Facebook at Manndi Maphies DeBoef. 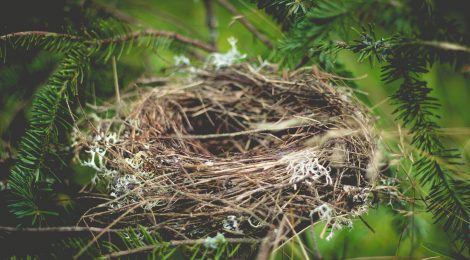 When the Nest Falls

“Look at the robin’s nest with the mama sitting on her eggs, Waylan!”

It was the spring of 2020, during the height of COVID, and my young son and I were playing in the backyard. I snapped a phenomenal picture of the mama bird resting peacefully atop her nest with no doubt that three to six beautiful turquoise baby eggs lay underneath.

The next day, I walked around to the side of the house to check on my mama bird. The nest was gone! What on earth could have happened in the span of twenty-four hours?

Thinking the nest had fallen, I went to the other side of the fence, and sure enough, there was the fallen nest and two baby blue eggs shattered on the ground. The tiny bodies were heartbreakingly recognizable. They had catapulted to the ground in what I assumed was a strong gust of wind from the previous night’s storm.

I regretfully walked inside to tell my youngest son what I had found. He was devastated.

How strange that one day all seemed normal and beautiful: new life waiting to hatch from two perfect little blue eggs. The next day, that mama bird’s whole nest, including the unborn babies inside, had been shattered, torn, and violently thrust to the ground.

Do birds mourn when their nests are destroyed? I know mama birds are protective of their young, but do they know when those young no longer exist? Or do they have the natural, unemotional instinct to go forth and reproduce?

I was immediately taken back to that time in my life when I first found out I was pregnant. I was over-the-moon ecstatic. I lived in a fantasy for weeks, imagining the tiny baby boy or girl growing within my very own body.

Then came the first OB appointment. Things did not look right; there was not enough growth. The doctor tried to prepare me for the worst. It came at the second appointment: There was no heartbeat.

“Loss of innocence” my then-husband called it. One day we were on cloud nine. All was right with the world. We were two youngsters in love, and that love had overflowed into a perfectly wanted and prayed-for growing being. The next day, that baby we had dreamed about, hoped and prayed for, was no longer there.

The devastation of loss, shattered dreams, unfulfilled hopes, and a life unlived unfolded around me like a permanent dark cloud refusing to float away and reveal the sun.

After months of endless grieving, constant praying, broken-heartedly asking “Why?” yet still resolving to try again, I found myself pregnant a few months later.

This second pregnancy was successful and the baby, born June 7, was a healthy, happy, nine-pound, eleven-ounce boy!

I went on to experience another miscarriage between my first baby and my second. It was no easier than the first, but for knowing the process and my body’s ability to physically rid itself of yet another precious soul not meant to be held lovingly in my arms.

Not one to accept defeat easily, I was ready to try again far sooner than my husband, still emotionally reeling from the loss. Nine months later, my second baby boy was born. This child was premature only compared to his big brother.

My world finally felt right. I was at peace and content in my role as wife and new mother. I had everything I ever wanted.

Unfortunately, my husband was not as blissfully content. The emotional damage caused by the fertility issues, coupled with some early marital struggles, had taken their toll on our marriage.

With a two-and-a-half-year-old son and a nine-month-old baby, as well as a mortgage, car payment, and two active dogs, he decided this was not the life for him. Or rather, I was not the wife for him.

Despite trying everything from intense counseling to begging God to change my husband’s heart and heal our broken marriage, less than two years later I found myself a divorced single mother of two.

My nest, much like the robin’s nest in my backyard, plummeted to the ground, spreading remnants of rejection, anger, bitterness, hatred, and brokenness in every direction it landed.

Based on these emotional recollections, I felt an intense sense of empathy toward that mama bird.

She had diligently built the perfect nest to bring her precious babies into the world. She had used such detailed organization and love to provide the safest, most comfortable, warm, and nurturing home her babies would ever know. Yet it was not enough to survive the impending storm.

In the same way, the plans I made for my life were not enough. They were not fulfilled the way I thought they should be. One day, things seemed perfect. The next, my world was violently turned upside down with the devastation of an F5 tornado, leaving more loss, pain, grief, hopelessness, and destruction in my world than I ever thought possible.

Will I ever climb out of the ashes left from the brutal, unforgiving destruction of my perfectly peaceful little nest?

Less than four years later, I met a kind and loving man, fell in love, and thought perhaps all my hardships had led me to where I was meant to be.

Just as I started to rebuild my nest and pull a safety net back into my life, my loving life partner and soon-to-be fiancé’ died unexpectedly one beautiful spring morning.

Once again, my nest was violently tossed to the ground, breaking all that was inside and causing a torrent of pain, loss, and grief in its wake. How will I ever rebuild from this latest tragedy?

When I saw that bird’s nest on a warm spring day last year, my mind immediately went to the losses in my life. I realized each loss served me in ways I could not see at the time.

I gained perspective from the Divorce Care course my church just happened to offer during that season of my life (and never has since). My faith deepened through constant prayer and a relationship with my Savior, the likes of which I had never known. Reliance on my heavenly Father became a necessity and not just a fleeting, rainy day, shallow desire. I gained strength.

I look back on the challenges I experienced and do not recognize the poor girl who existed before she emerged from these life-altering storms. She appears to be a sad, worried stranger, as well as the strongest warrior I have ever known. She is undoubtedly my heroine.

Two separate parts of myself came together, merging into one woman who has learned —the tough way — how inevitable change is and that tomorrow is not promised. She will never again take the blessings of life for granted, because they could be violently stripped away at any moment.

She survived. I survived. I imagine that mama robin survived, too. I did not see her lifeless body lying next to her shattered eggs and the broken pieces of her nest.

I imagine the mama bird flew to another tree and rebuilt a new and stronger nest. I imagine she will one day know the joys of motherhood and raise little robin babies that would never have existed had she not lost her two precious eggs from the first nest.

“Therefore I tell you, do not worry about your life, what you will eat or drink; or about your body, what you will wear. Is not life more than food, and the body more than clothes? Look at the birds of the air; they do not sow or reap or store away in barns, and yet your heavenly Father feeds them. Are you not much more valuable than they? Can any one of you by worrying add a single hour to your life?” (NIV).

If God cares about the birds of the air and is faithful to provide shelter, food, and family to these feathered beings, should I not rest in faith that He will do so for His non-feathered children as well?

I’ve learned that robins are known for singing before storms approach as well as after storms have passed — in all circumstances, as 1 Thessalonians 5:18 says we should do. For them, singing and praising before the storm comes is just as natural as after.

What a great lesson I personally learned from these red-breasted, joyful creators of the air. No matter what life throws at me, I know my heavenly Father will always be there to pick up the pieces and lovingly mold me into a greater version of myself.