Emily Marszalek has been published in a number of publications, including Angels on Earth, two Chicken Soup for the Soul volumes, The Lutheran Digest, Christian Broadcasting Network, Refresh Bible Study Magazine, Christian Devotions, Love Lines from God, and Daily Inspired Life. She lives in Moscow, ID. 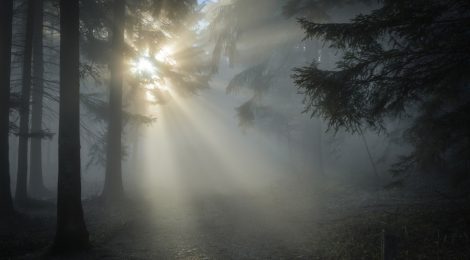 Learning to trust God when we don’t understand.

I about dropped the glass of lemonade cradled in my hand when my mom uttered that six-letter word. She had just concluded a phone call with her doctor to confirm the diagnosis: a rare form of Non-Hodgkin’s lymphoma.

Sitting next to each other in lawn chairs underneath the August sunshine, we processed the news. My eyes filled with tears. Embracing Mom in my arms, I could hardly muster a word.

My mind, however, was a flurry of thoughts.

This can’t be happening.

Not to my mom.

I felt sick to my stomach.

I had grown accustomed to watching Mom struggle with her health throughout most of my youth. From Hashimoto’s disease to severe complications from a hysterectomy gone wrong, she had suffered greatly.

Fibromyalgia was perhaps the worst of all, which led to constant pain, insomnia, brain fog, and debilitating fatigue. Even on the best days, I could see she was hurting.

Most days when I returned home from school, my mom was already in bed, desperate to regain some semblance of energy.

Almost fifteen years ago, during my sophomore year of high school, I returned home one day to see my mom not in bed but sitting in her computer chair, looking exuberant. As I walked through the front door, her face lit up. “Hi, Em! How was school today?”

To not see pain and fatigue painted on her face for even one afternoon was a priceless gift I didn’t realize how much I yearned for.

Through a variety of treatments, medications, and never-ending prayers, Mom’s health and quality of life had significantly improved by my twentieth birthday. It seemed the dark days of suffering were finally behind us.

I had my mom again.

Following Mom’s cancer diagnosis only a few years later, however, heartache and fear resurfaced with a vengeance.

After the initial diagnosis, one violent storm seemed to invoke another. Immunotherapy transfusions led to excruciating pain in my mom’s back and hips, causing her to frequently lose consciousness during treatment.

With each negative report, apprehension and confusion raged all the greater in my heart. Among the reemerging fear of losing my mom and an overwhelming sense of helplessness to ease her pain, something else bubbled deep within me: anger.

While my mom humbly trusted God to see her through this challenge as He had many times before in other challenges, I was feeling far less gracious and peaceful.

“Why would You allow her to go through this, God?” I questioned. “She’s a devoted Christian, marathon encourager, servant to all around her, and has already suffered greatly. And now, this!? Hasn’t she gone through enough!? Why, God?”

Bitterness budded in my heart as I grappled to understand.

I had grown up believing Romans 8:28: “And we know that in all things God works for the good of those who love him, who have been called according to his purpose.” I now considered those words hollow.

As I continued to watch my mom battle cancer, undergoing immunotherapy transfusion after transfusion, test after test, and biopsy after biopsy, my faith hung on by a thread. In the midst of the heartache and dismay, however, glimmers of light began to shine through the darkness.

My view was shifting, as if I had been looking at the individual pieces of a massive jigsaw puzzle, struggling to fit the pieces together and determine what picture the puzzle was destined to create. It was coming together, and I began to see things from a different, greater perspective.

It became evident that in the midst of the storm, God’s fingerprints were everywhere. Mom had opportunities to share love and encouragement with oncology nurses she befriended. She gifted uplifting books and articles to patients she encountered who were enduring similar health struggles.

She introduced a young mom of three, diagnosed with advanced leukemia, to the Lord, gifting hope to a hopeless heart.

I noticed that family time had morphed into a sacred occasion, as we were reminded of the fragility of life on earth. Despite living halfway across the country from one another, my mom and I became deliberate in our efforts to talk every week and text every day.

We even initiated the habit of regularly mailing each other handwritten cards, which always seemed to arrive in each other’s mailboxes at just the time we needed it most. Conversations that were previously mundane became priceless. Our family had become closer than ever.

With these golden nuggets scattered among the ashes, God was allowing me to see beauty in the midst of the unsightly.

God taught me that in the toilsome circumstances surrounding my mom’s health, He is a loving and merciful God who possesses understanding far beyond my own. I don’t have the full picture.

Recognizing my limited perspective, my job was to trust Him in spite of my unanswered questions. I clung to His promise: “I am with you always, to the very end of the age” (Matthew 28:20). It was a great comfort to know that even when the whole world fades away, He will remain with me — and He will remain with my mom.

God also reminded me that He understood my anguish regarding Mom’s health challenges, for Jesus himself suffered. He wept. He faced rejection and public humiliation. He suffered physical torture and was crucified on a cross.

Comfort came with knowing that it was OK to experience my human emotions — fear, confusion, even anger — and that I could express those feelings to Him because He understood.

Although my mom continues to battle health issues, it’s evident that God has been active, working all things for good in the storm. Not only is He working behind the scenes, but He is also right there with Mom and with me.

While I may never understand the “why” behind the “what” in my mother’s health challenges, I am assured of the “Who” with us each step of the way. He is the awe-inspiring, all-knowing, and ever-present Creator of the universe, who holds my future and my mom’s future in His almighty hands.

Scripture quotations are taken from the New International Version.